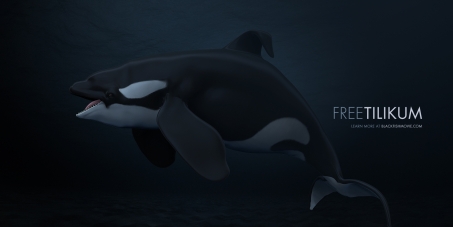 By continuing you agree to receive Avaaz emails. Our Privacy Policy will protect your data and explains how it can be used. You can unsubscribe at any time. If you are under 13 years of age in the USA or under 16 in the rest of the world, please get consent from a parent or guardian before proceeding.
This petition has been created by Carolyn B. and may not represent the views of the Avaaz community.
x

Sign this petition
Carolyn B.
started this petition to
SeaWorld
Tilikum is a large bull orca, who has been kept in captivity by Sea World for over 20 years. Taken from his mother and family pod at 2 years old, he has been continuously mis-treated by bad training, lack of proper care and abuse at the hands of a corporation that cares only for profit. He was forced to perform every hour on the hour, eight times a day, seven days a week. He is confined to a tank containing 0.0001 percent of the quantity of water that he would have in his natural habitat. The stress of captivity drives Tilly to exhibit abnormal repetitive behavior, including chewing on metal gates and the concrete sides of his tank—so much so that most of his teeth are completely worn down.The stress of captivity also causes Tilikum to exhibit aggression toward humans, which has cost the lives of three people. He is now kept in a tiny enclosure that limits his ability to swim, communicate with other Orcas, and interact with humans. He currently spends hours at a time floating listlessly in the water in a small tank described as a 'jailhouse' by an old trainer. Tilikum is not the only Orca who has become aggressive as a result of all the stress that the whales are forced to endure in the small tanks at SeaWorld, and numerous ex-trainers have called for their release. To use a living, breathing, self-aware and extremely intelligent sentient being as a sperm bank in a forced captive breeding program is completely inhumane and unethical. FREE TILIKUM AND STOP SEAWORLD FROM KEEPING ANY ORCAS CAPTIVE.
Report this as inappropriate
There was an error when submitting your files and/or report.
Inaccurate Inappropriate language Hate speech Illegal Commercial/spam Offensive
×

Today: Carolyn B. is counting on you

Carolyn B. needs your help with "SeaWorld: Blackfish :Free Tilikum ". Join Carolyn B. and 5,184 supporters today