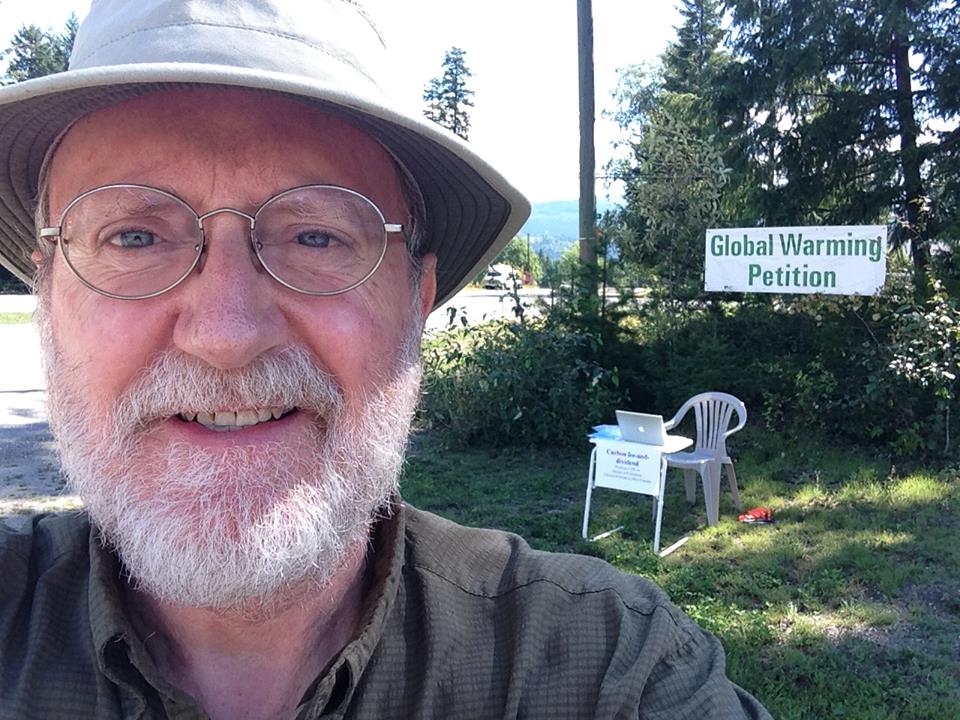 We ask for a worldwide referendum on carbon fee-and-dividend

By continuing you agree to receive Avaaz emails. Our Privacy Policy will protect your data and explains how it can be used. You can unsubscribe at any time. If you are under 13 years of age in the USA or under 16 in the rest of the world, please get consent from a parent or guardian before proceeding.
This petition has been created by Keith M. and may not represent the views of the Avaaz community.
x

Sign this petition
Keith M.
started this petition to
To the secretary-general and the members of the Security Council of the United Nations
Will you help fight climate change and reduce economic inequality worldwide by signing my petition?
Several years ago the child of a family member cried himself to sleep after watching a television documentary on climate change. That motivated me to work for a solution to global warming.
For 20 years I was editor of the prize-winning North Thompson Times in Clearwater, B.C. Canada. My time with the newspaper enabled me to see firsthand the effects of our increasing economic inequality – which is largely caused by the wealthy avoiding taxes and the rest of us paying the consequences.
There is a way to fight climate change and economic inequality at the same time. That method is carbon fee-and-dividend.
Carbon fee-and-dividend means charging a fee for the use of fossil fuels, similar to a carbon tax.
Unlike a tax, however, the money collected would not go into general government revenue but would be distributed to everyone as equal dividends (the equivalent of universal basic income).
The fossil fuel fee would steadily rise, encouraging people to find and use alternative sources of energy.
At the same time, the carbon dividends would shelter those with middle and low incomes from the effects of the fee and give them money to help pay for those alternatives.
Global problems require global solutions.
That means carbon fee-and-dividend would need to to be global in character – through the United Nations – in order to be adequately effective.
For example, global carbon fee-and-dividend that started at $30 per tonne of carbon dioxide would generate about $1,000 billion per year, enough to give every adult on the planet a carbon dividend of about $200 per year – doubling the annual incomes of millions of people.
The IPCC says we need to reduce our fossil fuel use by about half by 2030 and be carbon neutral by 2050.
It is hard to imagine how that could be done without a high global price on carbon dioxide from fossil fuels; and it is hard to imagine how a high global price on carbon would be politically acceptable unless all the money collected is returned as dividends to everyone.
In Switzerland, citizens have the right to bring forward important questions to a nationwide referendum through a petition with 100,000 names.
An equivalent number for a worldwide petition would be about 100 million names.
Please sign my petition to ask the secretary-general and the members of the Security Council of the United Nations to hold a worldwide referendum on whether planet Earth should have a global carbon fee-and-dividend system, with a steadily rising fossil fuel fee and with the proceeds to be distributed in equal dividends to all adults.
Keith McNeill
Clearwater, B.C.
Canada
www.facebook.com/CanadaFeeAndDividendPetition
#GlobalCarbonPetition
#GlobalCarbonFeeAndDividendPetition