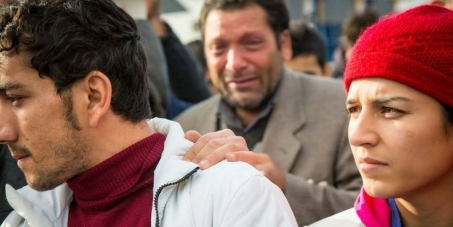 EU drowning children at its borders?

By continuing you agree to receive Avaaz emails. Our Privacy Policy will protect your data and explains how it can be used. You can unsubscribe at any time.
This petition has been created by Spyro L. and may not represent the views of the Avaaz community.

Sign this petition
Spyro L.
started this petition to
Σεσίλια Μάλμστρομ, Ευρωπαία Επίτροπος Εσωτερικών Υποθέσεων
Last week refugees from Syria and Afghanistan tried to enter Greece on a fishboat. Their hopes turned into a horrible nightmare. Stuck in a storm, the Greek coastguards, instead of rescuing them, capsized their boat when towing them back to Turkey at high speed. According to survivors, they refused to throw them lifejackets and were kicking them off and threatening them with guns when they tried to get on the safeguard boat. 12 people were drowned. But we can bring justice to them and stop these atrocities from happening again! The European Commissioner, Cecilia Malmström, has all the evidence she needs and the power to open an investigation on the push-backs of immigrants that are taking place in the borders of Greece and Turkey that blatantly violate EU law. We know she wants to be seen as someone who cares about this issue and with her term ending soon she wants to leave a standing legacy. So if thousands of us sign the petition asking her to do the right thing, we can create a media storm on the case and push her to give the order. Sign the urgent petition to ask Malmström to make the Greek authorities comply with EU and international law and to stop the brutal push-back practices that put the lives of innocent people and children into great danger. When we reach 100.000 signatures we will deliver our petition to Commissioner Cecilia Malmstrom and create media awareness on the case. Sign now and send to everybody.
Report this as inappropriate
There was an error when submitting your files and/or report.
Inaccurate Inappropriate language Hate speech Illegal Commercial/spam Offensive
×