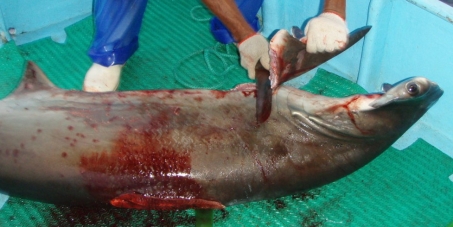 By continuing you agree to receive Avaaz emails. Our Privacy Policy will protect your data and explains how it can be used. You can unsubscribe at any time. If you are under 13 years of age in the USA or under 16 in the rest of the world, please get consent from a parent or guardian before proceeding.
This petition has been created by Scott S. and may not represent the views of the Avaaz community.
x

Please watch the following youtube video about the shark fin trade and read the message below:

The following message is from the Humane Society International (Canada) about shark finning:

The continuing practice of shark finning, which is the practice of removing the fins and discarding the remainder of the alive shark back into the sea and leaving it to die, is having a devastating effect on shark species around the world. The global shark fin trade is unsustainable and cruel. Tens of millions of sharks (estimated to be higher than 73 million per year) are mutilated and left to die year after year to feed the demand for shark fin soup. We must do something to put a stop to this brutal trade because sharks play a critical role in maintaining healthy, balanced ecosystems that humans depend on.


With federal legislation that would stop the import of shark fins into Canada still pending, it’s vital you let your Member of Parliament know you support the ban – and urge them to do the same!

There is still hope to save these iconic animals from extinction. Please take action. Sign this petetion and send a message to your Member of Parliament – ask them to support Bill C-380 and close the market for shark fins in Canada for good.

Today: Scott S. is counting on you