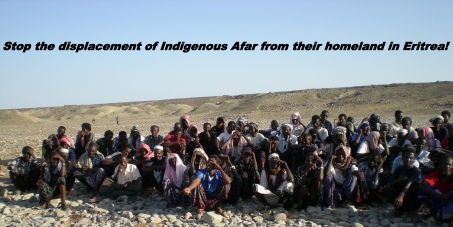 South Boulder Mines Ltd of Australia and the Government of Eritrea: Stop the displacement of Indigenous Afar from their home land in Eritrea!

By continuing you agree to receive Avaaz emails. Our Privacy Policy will protect your data and explains how it can be used. You can unsubscribe at any time. If you are under 13 years of age in the USA or under 16 in the rest of the world, please get consent from a parent or guardian before proceeding.
This petition has been created by Ahmed Y. and may not represent the views of the Avaaz community.
x

Sign this petition
Ahmed Y.
started this petition to
South Boulder Mines Ltd of Australia and the Government of Eritrea

The Afar are an ancient people, many of whom live as pastoralist nomads. Some 600,000- 800,000 Afar have lived in the Eritrea’s red sea coast at the convergence of what are now the States of Ethiopia, Djibouti and Eritrea since time immemorial. Afar territory in Eritrea known as Dankalia, has existed for centuries long before Eritrea was formed as a State. Dankalia's coast includes the country's two main port cities of Assab and Massawa. Dankalia’s coastal region is highly significant for both economic and geopolitical continuation of Eritrea’s tyrannical regime.

The Eritrean President, Isaias Afwerki, proclaimed in 1997 that all Afar lands and resources belong to the State, making it legal to sell or lease Afar property to foreign corporations and foreign states at the whims of his administration. It’s well known fact that Eritrea’s companies are partly owned by Eritrea’s military leaders and the Generals.
Now, the government’s mining agency, the Eritrean National Mining Company (ENAMCO) has found multinational partner corporation, the South Boulder Mines Ltd. of Australia. This 50-50 joint-venture deal signed on the Colluli Potash Project is massive and worth USD 150 billion, with territories spanning over 400km2 and it has a mining life of 50 years with 97 holes and containing resources of more than one billion tonnes of potassium bearing salts suitable for the production of potash fertilizers.
The current Eritrean regime has been systematically targeting the Afar people in order to remove them from this resource rich homeland and territory known to contain vast potash deposits and other precious metals including gold.

The violence against the Afar population in Eritrea was documented and in May 28th 2013, a report was published by United Nations Human Rights Council and the Special Rapporteur on the situation of human rights in Eritrea, Sheila B. Keetharuth. Ms. Keetharuth has condemned Eritrea for the use of violence against Afar, including extrajudicial killings, enforced disappearances, torture and rape, as well as the destruction of their traditional means of subsistence and livelihood, businesses and forced displacement from their traditional territory. As a result of this policy of aggression perpetrated by Eritrea, the indigenous Afar populations are fleeing from their ancestral territories and property by 10’s of thousands as refugees in neighboring Ethiopia, Djibouti and Yemen.

As defenders of democracy and human rights of indigenous minorities around the globe, we have an obligation to prevent further displacement of the Afar people from their lands, and possible extinction of this ancient people from Africa’s red sea coast. Initial production from the Colluli project in Dankalia, which contains an estimated 194m tonne of potash, is scheduled to begin in 2016 or sooner. We must act as global citizens to stop South Boulder Mines Ltd of Australia from carrying out this displacement project in Eritrea.