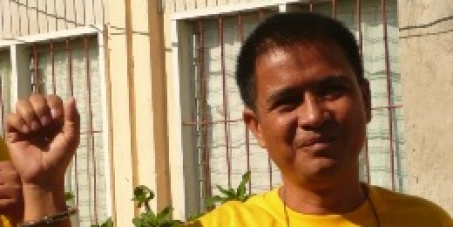 Stand Up for Justice! Trade Unionists are not Criminals!

By continuing you agree to receive Avaaz emails. Our Privacy Policy will protect your data and explains how it can be used. You can unsubscribe at any time. If you are under 13 years of age in the USA or under 16 in the rest of the world, please get consent from a parent or guardian before proceeding.
This petition has been created by Bino A. and may not represent the views of the Avaaz community.
x

Sign this petition
Bino A.
started this petition to
President Benigno Aquino III
For the last eight years, Virgilio "Gil" Corpuz has been a respected transport sector unionist from the Philippines. He was untiring in his efforts to fight the greed of oil giants and the state's oppressive taxes, fines and fees driving small transport operators and drivers to bankruptcy. Now, he is being silenced, intimidated and imprisoned in a remote mountain jail.

This is an alarming trend of falsely accusing unionists and leaders of civil society organizations of taking part in rebel ambuscades in places where they have never even set foot on. Their names and addresses were altered so that they could not be informed of the charges against them. They could not defend themselves in any preliminary investigation until a warrant of arrest comes out. Corpuz, like the rest of the 28 civil society leaders arrested during the Christmas season of 2012, were all deprived of liberty without due process of law.

Now, Corpuz is facing a long trial and could unjustly spend the rest of his life in prison – unless the international community sends strong signals to the Philippine government that this grave violation of civil and political rights must be stopped. Civil society leaders must be protected and supported and not unjustly branded as criminals.