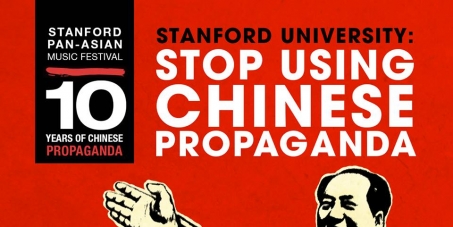 By continuing you agree to receive Avaaz emails. Our Privacy Policy will protect your data and explains how it can be used. You can unsubscribe at any time. If you are under 13 years of age in the USA or under 16 in the rest of the world, please get consent from a parent or guardian before proceeding.
This petition has been created by Gabriel F. and may not represent the views of the Avaaz community.
x

Sign this petition
Gabriel F.
started this petition to
Stanford University
Stanford University recently announced that it would be hosting a ‘Pan Asian Music Festival’ that is being directly sponsored by the Chinese Ministry of Culture, Confucius Institute, and the Chinese controlled local government in Tibet. It is at best, a propaganda event aimed at influencing an American audience. With shows titled “Shambala Impression”, most of the audience would never know that Tibetans are engaged in a daily struggle against genocide and brutal occupation. Musicians, Teachers, Students, Intellectuals are imprisoned and tortured on a regular basis in Tibet, simply for just being Tibetan, or expressing political sentiments critical of the CCP and its occupation. The Canadian Association of University Teachers has called on Universities and Colleges to sever their ties with the Confucius Institutes because it ‘subsidized’ and ‘supervised’ by the authoritarian government of China.

While Stanford keeps its multi-million dollar China endowment secure, opening projects across the Chinese mainland, it has become a direct proxy for the Chinese government itself. The stakes have never been higher and academic freedom in America is truly in grave danger.

WHAT YOU CAN DO:

We need your voice to put an end to this blatant Chinese government propaganda on Stanford's campus. With enough phone calls, emails, and letters, we can pressure the school into canceling all offensive Tibetan events.

Office of the President Stanford University

Today: Gabriel F. is counting on you