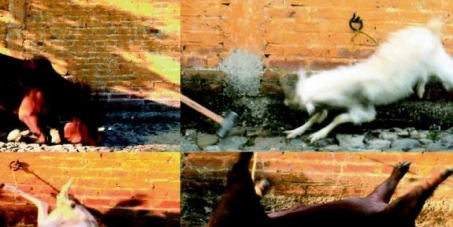 By continuing you agree to receive Avaaz emails. Our Privacy Policy will protect your data and explains how it can be used. You can unsubscribe at any time. If you are under 13 years of age in the USA or under 16 in the rest of the world, please get consent from a parent or guardian before proceeding.
This petition has been created by Aisha A. and may not represent the views of the Avaaz community.
x

Along with a variety of other elements, the show includes a series of video loops of animals being burnt alive. Some of his other pieces include a video of animals being bludgeoned to death with a sledgehammer blow on the head in front of a brick wall. The animals killed include a pig, goat, deer, ox, horse and sheep.
Abdessemed issued a statement in response but refused to justify, excuse or contextualize the killings, instead declaring his commitment to preserve the status of “an act of slaughter,” full stop, “without spectacularization and without dramatization.”

We, Qataris and residents of Qatar, are outraged and shocked at the fact that our modern art museum, the until now respected Mathaf, promotes these violent and tasteless works that have nothing to do with real art and creativity, and we demand the exhibition to be cancelled and the directors responsible fired!

Some of his other disturbing work:
- Adel traps animals in a pen, including pit bulls and roosters, and causes them to rip each other apart. The film is titled "Usine" was featured in May 2009 at a New York exhibit
- snakes and frogs kill each other on camera (in “Usine” or “Factory,” from 2008);
- a piglet eagerly nurses at a woman’s breast (“Lise,” 2011);

If you are outraged, too, you can voice your opinion here:

FB page for the campaign:
https://www.facebook.com/pages/Stop-Adel-Abdessemed-and-Mathafs-Animal-Cruelty/468175103298693

Today: Aisha A. is counting on you

Aisha A. needs your help with "Stop Adel Abdessemed's Exhibition in Mathaf". Join Aisha A. and 15,247 supporters today