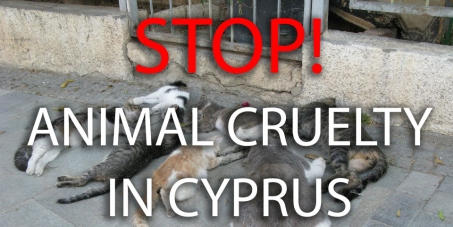 By continuing you agree to receive Avaaz emails. Our Privacy Policy will protect your data and explains how it can be used. You can unsubscribe at any time. If you are under 13 years of age in the USA or under 16 in the rest of the world, please get consent from a parent or guardian before proceeding.
This petition has been created by Lydia K. and may not represent the views of the Avaaz community.
x

Sign this petition
Lydia K.
started this petition to
Nicos Anastasiades (President of Cyprus)
Animals on the island of Cyprus have long been considered as an inconvenience and that they do not deserve to be treated with the appropriate respect and care. People from a young age are brought up to accept that animals are worthless and that it is fun and acceptable to torture, maim and kill them in horrific ways. These people not only go unpunished but also have the luxury and audacity of bragging about their actions to others.

On the contrary those that work hard to implement world proven methods of controlling the numbers of animals through TNR (Trap Neuter Release) are chastised by others and left without the support of government bodies. Government bodies as a whole do not present a united front with their advice to the public and their actions. Instead of supporting those that run these programs, they suggest that you just ‘stop feeding them’ and ignore your complaints.

In regards to cats:
• It is proven that if you kill them, you will not create any meaningful reduction in their population. More will simply come and take their place.
• Transporting / abandoning them to other places, such as the sea fronts and municipal parks not only is illegal but also creates additional burden on those that run TNR programs in those areas. By abandoning them in unpopulated areas you are only ensuring that they starve to death.
• The only proven method with meaningful results is TNR (Trap Neuter Release). The cat colonies are managed by people who feed the animals and make sure that they are trapped / neutered and released back in to the colony. By feeding these animals you gain their trust and can therefore track the health of the colony and also make sure any newcomers will also be neutered. Neighbourhoods should work together to manage the cats in their areas. At the very least, neighbours that do not wish to participate should not hinder the efforts of others.

In regards to dogs:
• It is unacceptable to raise and allow a dog to attack other animals or people.
• It is your responsibility to make sure you abide by Dog related laws and that your dogs are not left to roam the streets causing problems for others.
• You are not allowed to let them run free when on walks, especially if they are aggressive. It is not fair to the animal to be put to sleep because it attacked someone and the owner to walk unpunished to repeat their actions with another dog.
• Dogs and animals in general are not Christmas, birthday or name day presents that you give to children and then forget about them once the fun ends. The municipal pounds are filled with such abandoned animals.
• It is your responsibility to spay/neuter your dog so that you are not contributing to the overpopulation problem. It is not acceptable to allow your dog to get pregnant then throw her and the puppies away because you cannot feed them all.

We ask that:
• An animal welfare and wildlife crime division is formed within the police. These people must be educated so that they present a united front when dealing with these cases. They must enforce the law with meaningful monetary and penal punishments for those that break it.
• The Government veterinary services should work together with the public and animal charities to implement humane solutions of controlling animal overpopulation. They should stop spreading misinformation or suggesting ‘stop feeding them’ when TNR people ask for help in dealing with people that harass them and break the law.
• Schools must educate children and teachers with the help of charities in regards to Animal welfare. Similarly a campaign must be run across the island educating older people in regards to what is acceptable behaviour while making it clear that we will not tolerate animal cruelty any longer.

Today: Lydia K. is counting on you