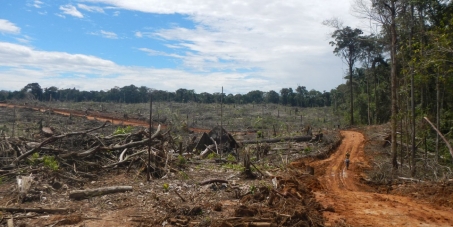 By continuing you agree to receive Avaaz emails. Our Privacy Policy will protect your data and explains how it can be used. You can unsubscribe at any time. If you are under 13 years of age in the USA or under 16 in the rest of the world, please get consent from a parent or guardian before proceeding.
This petition has been created by Alexander S. and may not represent the views of the Avaaz community.
x

As if it wasn´t enough bulldozing the rainforests in Asia for large palm oil plantations, the company East Pacific Capital have now set their eyes on the most bio-diverse region on the planet – The Amazon. Over 10,000 hectares have already been destroyed in Peru, and it´s not stopping.

The large scale destruction of the rainforest for palm oil plantation leads to the loss of biodiversity, massive release of greenhouse gasses and exploitation of communities, with small farmers having their lands seized and bulldozed.

This is a call to stop the bulldozing of the Amazon Rainforest and implement a truly sustainable solution.

Today: Alexander S. is counting on you