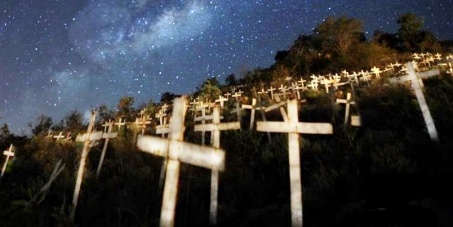 Stop the murders in South Africa

By continuing you agree to receive Avaaz emails. Our Privacy Policy will protect your data and explains how it can be used. You can unsubscribe at any time. If you are under 13 years of age in the USA or under 16 in the rest of the world, please get consent from a parent or guardian before proceeding.
This petition has been created by SouthAfrican C. and may not represent the views of the Avaaz community.
x

Sign this petition
SouthAfrican C.
started this petition to
South African Government, The South African Ambassador to the United States, Ebrahim Rasool, United Nations Office of the Special Adviser on the Prevention of Genocide

The South African Government for the last 18 years has adopted a policy of deliberate government abolition and disarmament of rural Commandos run by farmers themselves for their own self-defense. The policy has resulted in a four-fold increase in the murder rate of Afrikaner commercial farmers. This policy is aimed at forced displacement through terror. It advances the goals of the South African Communist Party’s New Democratic Revolution (NPR), which aims at nationalization of all private farmland, mines, and industry in South Africa. Disarmament, coupled with Government removal of security structures to protect the White victim group, follows public dehumanization of the victims, and facilitates their forced displacement and gradual genocide.

Afrikaner farm owners are being murdered at a rate four times the murder rate of other South Africans, including Black farm owners. Their families are also subjected to extremely high crime rates, including murder, rape, mutilation and torture of the victims. South African police fail to investigate or solve many of these murders, which are carried out by organized gangs, often armed with weapons that police have previously confiscated. The racial character of the killing is covered up by a SA government order prohibiting police from reporting murders by race. Instead the crisis is denied and the murders are dismissed as ordinary crime, ignoring the frequent mutilation of the victims’ bodies, a sure sign that these are hate crimes.

However, independent researchers have compiled accurate statistics demonstrating convincingly that murders among White farm owners occur at a rate of 97 per 100,000 per year, compared to 31 per 100,000 per year in the entire South African population, making the murder rate of White SA farmers one of the highest murder rates in the world.

Incitement to genocide is a crime under the International Convention for the Prevention and Punishment of the Crime of Genocide, to which South Africa is a state-party.

The ANC government has promoted hate speech that constitutes “incitement to genocide.” The President of the ANC Youth League, Julius Malema, revived the "Kill the Boer, Kill the Farmer" hate song at ANC rallies, until it was declared to be hate speech by a South African judge, and Malema was enjoined from singing it. For other reasons, Malema was later removed as ANCYL President. His followers continue to sing the hate song, and the Deputy President of the ANCYL has called for “war,” against “white settlers.”

After the judge’s injunction to halt singing of the hate song, even the President of South Africa, ANC leader Jacob Zuma, himself, began to sing the “Shoot the Boer” song. Since Zuma began to sing the hate song on 12 January 2012, murder and, torture of White Afrikaners (old people, women, children etc) is sill increasing every month!

There have been many attempts to raise awareness about all the murders in South Africa. It has even received some international media attention, but this has not had an impact on the rate of the occurrence in South Africa. These murders are not ordinary robberies with aggravated circumstances - but victims are being tortured in brutal ways during the killings. Government in South Africa has not responded to the request for more policing and effective prosecution of the perpetrators. It is time to put international pressure on the S.A. Government to do what it takes to protect our farmers. Crime in South Africa is out of control and a sense of lawlessness is prevailing, not only in the rural areas. We urge the S.A. Government to start a serious campaign to raise a stronger (non-corrupt) police force and to make funding available to protect rural communities. The concern with violent and brutal crime in our country is magnified by the lack of successful prosecutions and investigations. Corruption is spreading throughout our civil society, and police are often part of the crimes. This is a desperate situation - for ALL SOUTH AFRICANS, and the lack of action regarding the brutality of farm murders in South Africa, has proven a need to take this battle into the International arena! This petition could help put pressure on the local and international community to take action, any action, which would lead to a safer environment for everyone in South Africa. The aim of this petition is to create one united stand against lawlessness in South Africa, and to put a stop to this! If you want more information on the situation, just search murders in South Africa or farm murders in South Africa on any search engine.

This petition is not intended to turn a blind eye to other crimes and atrocities against other ethnic groups in South Africa, but rather to raise awareness about continuous racism in this post apartheid "democracy". It is the responsibility of the New South Africa to STOP the hate crimes that cause tension and division among ethnic groups in SA.

Today: SouthAfrican C. is counting on you