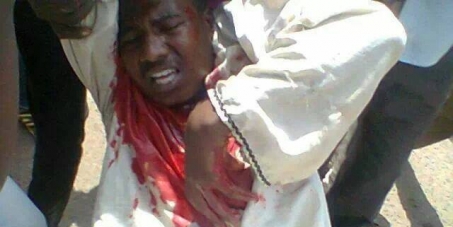 By continuing you agree to receive Avaaz emails. Our Privacy Policy will protect your data and explains how it can be used. You can unsubscribe at any time. If you are under 13 years of age in the USA or under 16 in the rest of the world, please get consent from a parent or guardian before proceeding.
This petition has been created by Sudanese A. and may not represent the views of the Avaaz community.
x

Sign this petition
Sudanese A.
started this petition to
US special envoy to sudan "Donald Both", United Nation secretary general "Ban-Ki Mon", High Representative of the European Union for Foreign Affairs "Baroness Catherine Ashton", African Union Chairperson "Dr.Delamini Zuma", Secretary General of the League
September 2013 saw hoards of people taking to the streets of Sudan in protest, sparked by the government’s lift on fuel subsidies in the already impoverished country. More than two hundreds people, mostly youth, were shot to death by Sudanese police and intelligence forces. Guns aimed at chests and head which indicates that the aim was "shoot to kill." Sudanese government showed  no remorse or any sense of responsibility.  Moreover, there are more that 800 detainees (political activists and protesters) who are subject to torture and intimidation behind bars. Detainees are not allowed to visitations with their families or lawyers. You support could help in bringing justice, rescuing a detainee, and elevating freedom of press conditions. You could help bringing those who committed crimes against civilians before court.

Today: Sudanese A. is counting on you

Sudanese A. needs your help with "Stop Human Rights Violations in Sudan ". Join Sudanese A. and 3,590 supporters today