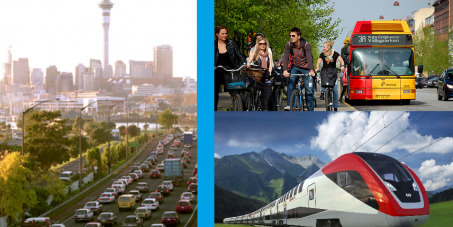 This petition is closed
2,390 have signed. Let's get to  5,000
2,390 Supporters
Luke C.
started this petition to
Gerry Brownlee, Transport Minister

Transport in New Zealand is at a critical juncture. The Government is locking in plans to spend more than $12 billion on a few costly motorways – its “Roads of National Significance”, the most ambitious motorway building effort in at least a generation. Meanwhile, it is scrimping and under-investing in all other forms of transport.

At a time when petrol prices are hitting new record highs, traffic growth has stalled and more people would prefer to ditch their cars, and climate change is fuelling more extreme weather leading to crop failures and higher food prices, the Government’s plan is stuck in the past rather than investing in the smart, low carbon economy we need.

Transport Minister Gerry Brownlee has just tabled a new bill in Parliament to allow the Government to borrow more money for transport spending – this could see it pushing ahead faster to ram these projects through. It’s time to stop this madness.

Watch this awesome video summarising why we need a shift, or read on:

This is part of Generation Zero's 50/50 campaign calling for a fair share for smart transport. Find out more at:

The spending on the “RoNS” comes at the expense of better, smarter uses for that money that would give Kiwis a transport system with more freedom of choice where alternatives to driving are easier, cheaper and safer.

Total funding available for new public transport, walking & cycling infrastructure this decade is only around $0.5 billion combined – new highways get 30 times as much as that.

The Government is not putting up any funding at all for Auckland’s City Rail Link – a vital project wanted by 2/3 of Aucklanders that would allow the number of trains in the rail network to double.

Kiwirail is starved of money and needs more Government support to invest in quality infrastructure so rail freight can get competitive with trucking. Around 300 skilled Kiwirail workers are set to lose their jobs and the company is being forced to make short-sighted investment decisions.

Even maintenance of our existing road network is being neglected! The maintenance budget is frozen, meaning rural ratepayers will have to pick up more of the tab to look after local road networks that are vital to the New Zealand economy.

The good news is, with balanced transport spending it doesn’t have to be this way. By redirecting just a quarter of the money from the RoNS, the Government could afford to fund half of the City Rail Link, triple the walking and cycling budget, invest in Kiwirail to keep those workers in jobs, and unfreeze the local road maintenance budget to keep up with inflation.

Check out this infographic showing the current unbalanced budget and what we could do with even a slight change:

Even by the Government’s own figures, its belief that the RoNS will boost our economy is highly dubious and lacking evidence. This just doesn’t make sense. New Zealanders deserve a balanced transport plan with foresight.

This debate on transport spending is part of something even larger: this is a battle of ideas about what the future looks like. Let’s send our message to the Government that our future depends on a smart, low carbon economy.

Sign and share the petition, video and infographic! Together we can shift transport spending to smarter choices.

Today: Luke C. is counting on you