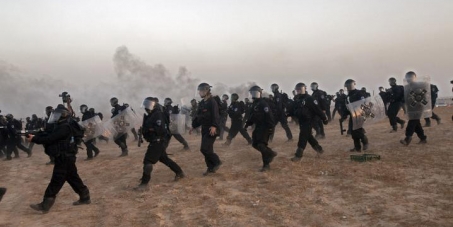 By continuing you agree to receive Avaaz emails. Our Privacy Policy will protect your data and explains how it can be used. You can unsubscribe at any time. If you are under 13 years of age in the USA or under 16 in the rest of the world, please get consent from a parent or guardian before proceeding.
This petition has been created by Adalah L. and may not represent the views of the Avaaz community.
x

The Israeli Knesset approved the discriminatory Prawer-Begin Bill in its first reading on June 24 2013, with 43 votes for and 40 votes against. The bill is now discussed at the Committee for Interior Affairs before the final Knesset vote. There is still time to act!

The legislation will serve as the implementing arm of the Prawer-Begin Plan, the government’s overarching policy framework for the Arab Bedouin community. If enacted into law and implemented, the plan would forcibly displace tens of thousands of Arab Bedouin citizens of Israel living in the unrecognized villages in the Naqab (Negev) desert in the south of Israel. It would dispossess the Bedouin of their property and historical rights to the land, destroy the social fabric of their communities, and condemn thousands of families to lives of poverty and chronic unemployment.

The representatives of Bedouin villages have repeatedly attempted to engage the government in a dialogue about the plan, but have been rebuffed. They assert that the law and the policy that it embodies are based on false and discriminatory views of the Bedouin as trespassers on their land. The Prawer-Begin Plan ignores the fact that most of the Bedouin villages have existed in their present locations since before the establishment of the state of Israel, or were created when the Israeli Military Government forcibly displaced the Arab-Bedouin to the Siyag region of the Naqab in the 1950s.

Today: Adalah L. is counting on you