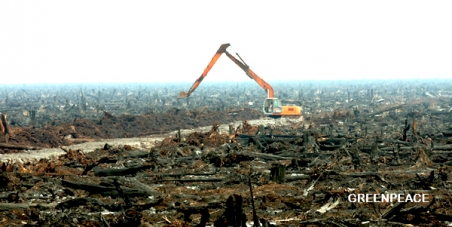 This petition is closed
50 Supporters
Michael A.
started this petition to
John Hayes MP, Edward Davey MP
The rush to burn biofuels is destroying rain-forests , causing land-grabbing world-wide, and starving children. But instead of working to stop this madness, the UK government wants to continue subsidies for burning liquid biofuels for electricity -- worth over a hundred million pounds a year. This will drive demand for palm-oil, particularly in Malaysia and Indonesia -- where an area of rainforest 4 times the size of Wales will be cleared to make way for palm-oil plantations . Science shows that burning biofuels is worse for climate change than burning fossil fuels. It’s a dangerous climate con, and a disaster for orang-utans and rare species like the Sumatran tiger.

The Arctic ice-sheet is melting and people are starving. Our government should not be using the public's money to divert crops to fuel our cars and power-plants and encourage rainforest destruction . Germany and the Netherlands have seen reason and killed these evil subsidies for biofuel electricity, and there is still time for the British Government to do the same.

In just over a week the new Energy Minister, John Hayes, will present new subsidy plans to MPs for approval . Let’s call on Hayes to stop using our money to burn food and ask him to listen to his own Chief Scientific Advisor, Professor Sir John Beddington, who said, “Cutting down rainforest to produce biofuel crops is profoundly stupid.” Sign the petition now, and forward this campaign to everyone.

Today: Michael A. is counting on you