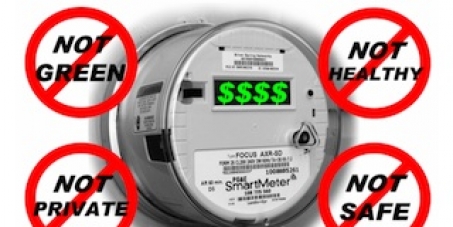 Stop US and Worldwide Smart Grid

By continuing you agree to receive Avaaz emails. Our Privacy Policy will protect your data and explains how it can be used. You can unsubscribe at any time. If you are under 13 years of age in the USA or under 16 in the rest of the world, please get consent from a parent or guardian before proceeding.
This petition has been created by Elizabeth B. and may not represent the views of the Avaaz community.
x

The US and other governments around the world are using smart grid and smart meters to spy on ordinary citizens in their own homes and businesses. Smart grid and smart meters also emit weapons grade pulsed microwave radiation that can maim and/or kill people. Smart meters and smart grid have been "deployed" amongst enormous worldwide backlash. Citizens who are educated on the how smart meters and smart grid work and what they do, do not want them on their homes, businesses or in their neighborhoods. Citizens who seemingly "don't care" just do not know the facts because they have been COVERED UP by those implementing the meters and grid. Stop wasting worldwide tax dollars and resources on illegal infrastructures that simultaneously cause severe health effects and death while also spying on people. Lower carbon emissions can be achieved by harnessing solar power and stopping the global chemtrail/geo-engineering that blocks it, making it illegal to cut down rain forests and utilizing wind power. Citizens of the world do not need armed spy devices and infrastructures to reduce global warming...this is a fallacy propagated by those behind the implementation of smart grid and smart meters. Smart meters also create more carbon emissions by using electricity as an additional appliance left on 24/7 and billed to the property where it sits. Analog meters also require much less electricity than smart meters. STOP FUNDING AND DEPLOYING SMART GRID AND SMART METERS IN THE US AND WORLD NOW!!!

Today: Elizabeth B. is counting on you

Elizabeth B. needs your help with "Stop US and Worldwide Smart Grid". Join Elizabeth B. and 1,573 supporters today