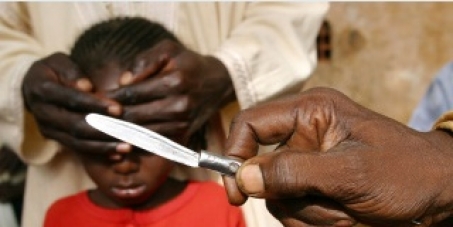 By continuing you agree to receive Avaaz emails. Our Privacy Policy will protect your data and explains how it can be used. You can unsubscribe at any time. If you are under 13 years of age in the USA or under 16 in the rest of the world, please get consent from a parent or guardian before proceeding.
This petition has been created by RUTH B. and may not represent the views of the Avaaz community.
x

Sign this petition
RUTH B.
started this petition to
Theresa May (Home Secretary), Bernard Hogan−Howe (Commissioner of the Metropolitan Police Force)
Thousands of young girls and women in the UK are at risk of female genital mutilation every year. Last month, a Sunday Times investigation revealed that undercover reporters had filmed a “respected dentist” and an “alternative medicine practitioner” offering to perform this operation right here in the UK. Since the article’s publication, there have been two arrests.

However, in London alone, police have received 166 complaints over the past four years, but not one has come to court. In fact, no one has ever been convicted of this assault in Britain. The reason? Authorities are turning a blind eye and refusing to commit the resources needed to stamp out this horrific problem.

But the Times’ explosive report gives us a window of opportunity. Let's now build a national outcry for action. Please sign my petition calling on Home Secretary, Theresa May, and the head of the Metropolitan Police Force, Bernard Hogan-Howe, to find and prosecute those responsible for mutilating women and girls in the UK and put in place measures to stamp out this cruel and criminal practice. Once enough people have signed, I will get decision makers' attention directly and via the media.


*Clarification: The email from Avaaz stated that “Each year, tens of thousands of girls in the UK are forced to have their genitals cut...”. In reality, an estimated 24,000 girls are at risk each year of undergoing the most severe type of FGM.

Today: RUTH B. is counting on you

RUTH B. needs your help with "Stop female genital mutilation in the UK!". Join RUTH B. and 64,459 supporters today