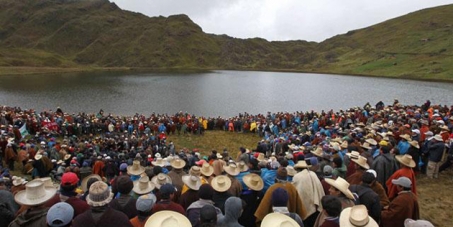 Victory
This petition is closed
50 Supporters
CATAPA -.
started this petition to
The investors of Newmont Mining Corporation, World Bank President
In Northern Peru a fight between communities and one of the world’s largest gold mining companies rages on. The company, Newmont Mining, wants to build a massive $ 4.8 billion goldmine in one of Peru’s most fragile highland ecosystems . The mine will destroy local lakes, pollute water sources, and threaten surrounding communities’ way of live that has existed for generations. A large majority of the Cajamarcan people oppose to the project . Now, we are looking to the international community for help in supporting the communities of northern Peru in this David vs. Goliath fight for clean water and a healthy environment . They won’t trade gold for water at any price. There are too many risks.


Democratic deficit: The local people of the Cajamarca region were not consulted on the Conga project, the government instead decided to grant the concession to the mining company without community consent. Moreover, opposition to the project is now being criminalized by the Peruvian government and Newmont; 5 demonstrators have been killed by police forces, more than 100 persons are being charged and more than 50 people have been injured.

A mining company with a questionable reputation: The Conga project will be an extension of Minera Yanacocha, whose shareholders are Newmont Mining Corporation, Compañía Buenaventure and the IFC of the World Bank. Yanacocha already has a 19 year history of mining operations in Cajamarca, with a long record of social and environmental conflicts. They were responsible for one of the mayor environmental accidents in history: the mercury spill in the community of Choropampa in 2000.

Environmental risks: The project is located in a highly vulnerable ecosystem and will destroy sources of 5 rivers in the region, 5 mountain lakes, 700 springs and hundreds of acres of Andean vegetation and wetlands; this way affecting the water supply of the local people. In this area millions of tons of toxic waste will be stored, with the risk of contaminating the surface and subterranean waters.

Economic injustice: Mining employs only 1.5% of the local people. Agriculture and stockbreeding are the main economic activities of the region, employing more than 50% of the people in the region. Conga will threaten the livelihoods of the majority of the region.


Please tell the investors of Newmont not to invest in the Conga project.