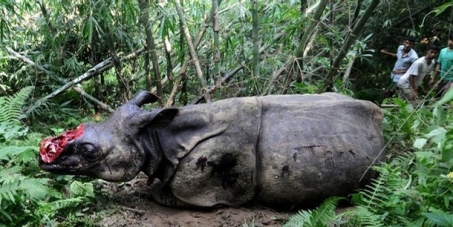 By continuing you agree to receive Avaaz emails. Our Privacy Policy will protect your data and explains how it can be used. You can unsubscribe at any time. If you are under 13 years of age in the USA or under 16 in the rest of the world, please get consent from a parent or guardian before proceeding.
This petition has been created by Sanctuary A. and may not represent the views of the Avaaz community.
x

Sign this petition
Sanctuary A.
started this petition to
Prime Minister of India, Manmohan Singh
Update: Two more rhinos have been killed since we launched this campaign. Let's act now to stop this mindless massacre!

As the editor of India’s most trusted wildlife magazine*, I’m dismayed by the increasing rhino poaching incidents in what was once a well-protected national park. And I dread the coming monsoon when brutal poachers will go on a rhino-killing spree when much of the park is inaccessible and difficult to protect. But together we can get PM Singh to help save India’s last rhinos -- before the slaughter begins.

Poachers in the pay of the illegal international wildlife trade ran riot when the government removed experienced rangers from the Kaziranga National Park, but popular pressure has forced them to reinstate some of the best people. However, these brave rangers are up against ruthless Rambo-style poachers carrying AK47 assault rifles and desperately need more manpower and equipment to fight back. Since this is happening in PM Singh’s state, Assam, a massive, targeted public outcry can get him to help stop the rhino killing.

Sign this urgent petition to the PM and tell everyone calling on him to act to protect the rhinos before the monsoons hit and the poachers move in. When over 50,000 of us sign, we will create a media storm and stage a hard-hitting stunt outside the PM’s office.

Today: Sanctuary A. is counting on you

Sanctuary A. needs your help with "Stop the Rhino Killers". Join Sanctuary A. and 34,726 supporters today