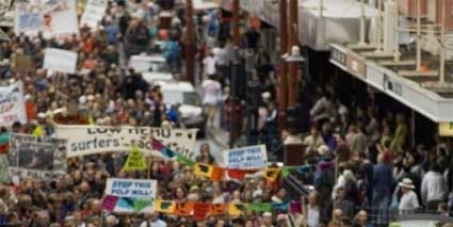 Stop the Tamar Valley Pulp Mill from being built

By continuing you agree to receive Avaaz emails. Our Privacy Policy will protect your data and explains how it can be used. You can unsubscribe at any time. If you are under 13 years of age in the USA or under 16 in the rest of the world, please get consent from a parent or guardian before proceeding.
This petition has been created by Fran P. and may not represent the views of the Avaaz community.
x

Gunns' cosy relationship with local politicians and the media has allowed them to force the project through without proper consultation. The corporate effort was spearheaded by the former head of Gunns, now facing criminal insider trading charges, and the approval process has been called "corrupt" by respected Australian senators and national environmental groups.

Only a strong public outcry can stop this mill and clean up Gunns' control of our state government. With other local people, I've been protesting this mill for years -- but with your help, we can raise an outcry of such a scale that we can't be ignored. Sign my petition to tell the Tasmanian government to reject the mill and stop Gunns' destruction!

Today: Fran P. is counting on you