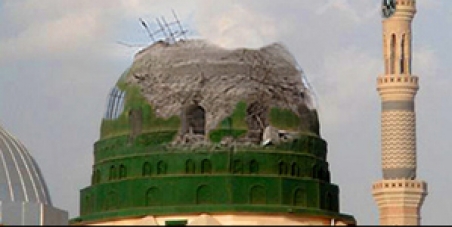 By continuing you agree to receive Avaaz emails. Our Privacy Policy will protect your data and explains how it can be used. You can unsubscribe at any time.
This petition has been created by Hasin and may not represent the views of the Avaaz community.

For many years, hardline Wahabi clerics have had their sights set on the 15th century green dome that rests above the tomb holding the Prophet, Abu Bakr and Umar in Medina. The mosque is regarded as the second holiest site in Islam. Wahabis, however, believe marked graves are idolatrous. A pamphlet published in 2007 by the Saudi Ministry of Islamic Affairs, endorsed by Abdulaziz Al Sheikh, the Grand Mufti of Saudi Arabia, stated that "the green dome shall be demolished and the three graves flattened in the Prophet's Masjid".
refer to http://www.independent.co.uk/news/world/middle-east/mecca-for-the-rich-islams-holiest-site-turning-into-vegas-2360114.html

When an idiotic movie about the Prophet was made, Muslims worldwide protested. It would be hypocritical of us now to allow the destruction of the Prophet’s birthplace, where he prayed and finally where he was buried.

Find below a list of some of the destroyed sites and some of the sites in danger of destruction as quoted from wikipedia:

In 1801 and 1802, the Saudi Wahhabis under Abdul Aziz ibn Muhammad ibn Saud attacked and captured the holy Shia cities of Karbala and Najaf in Iraq, massacred parts of the Muslim population and destroyed the tombs of Husayn ibn Ali who is the grandson of Muhammad, and son of Ali (Ali bin Abu Talib), the son-in-law of Muhammad. (see: Saudi sponsorship mentioned previously) In 1803 and 1804 the Saudis captured Makkah and Medina and destroyed historical monuments and various holy Muslim sites and shrines, such as the shrine built over the tomb of Fatimah, the daughter of Muhammad, and even intended to destroy the grave of Muhammad himself as idolatrous, causing resentment throughout the Muslim World.

Below is the incomplete lists of destroyed sites

Jannat al-Baqi in Medina, leveled, still open access for men only.
Jannat al-Mu'alla, the ancient cemetery at Mecca.
Grave of Hamida al-Barbariyya, the mother of Imam Musa al-Kazim.
Grave of Amina bint Wahb, Muhammad’s mother, bulldozed and set alight in 1998.
Graves of Banu Hashim in Mecca.
Tombs of Hamza and other martyrs were demolished at Uhud.
Tomb of Eve in Jeddah, sealed with concrete in 1975.
Grave of the father of Muhammad, in Medina.

The house of Mawlid where Muhammad is believed to have been born in 570. Originally turned into a cattle market, it now lies under a rundown building which was built 70 years ago as a compromise after Wahhabi clerics called for it to be torn down.

The house of Khadija, Muhammad’s first wife. Muslims believe he received some of the first revelations there. It was also where his children Fatimah and Qasim were born. After it was rediscovered during the Haram extensions in 1989, it was covered over and it was made into a library.

House of Muhammed in Medina, where he lived after the migration from Mecca.

Dar al Arqam, the first Islamic school where Muhammad taught. It now lies under the extension of the Masjid Al Nabawi of Madinah.

Qubbat’ al-Thanaya, the burial site of Muhammed's incisor that was broken in the Battle of Uhud.

Mashrubat Umm Ibrahim, built to mark the location of the house where Muhammad’s son, Ibrahim, was born to Mariah.

Dome which served as a canopy over the Well of Zamzam.

House of Ali where Hasan and Husayn were born.

When the Wahabis took Mecca in the 1920s they destroyed the dome on top of the house where the Prophet Mohammed was born. It was then used as a cattle market before being turned into a library after a campaign by Meccans. There are concerns that the expansion of the Grand Mosque will destroy it once more. The site has never been excavated by archaeologists.

Ottoman and Abbasi columns of the Masjid al-Haram

Slated for demolition as part of the Grand Mosque expansion, these intricately carved columns date back to the 17th century and are the oldest surviving sections of Islam's holiest site. Much to the chagrin of Wahabis, they are inscribed with the names of the Prophet's companions. Ottomon Mecca is now rapidly disappearing.

For many years, hardline Wahabi clerics have had their sights set on the 15th century green dome that rests above the tomb holding the Prophet, Abu Bakr and Umar in Medina. The mosque is regarded as the second holiest site in Islam. Wahabis, however, believe marked graves are idolatrous. A pamphlet published in 2007 by the Saudi Ministry of Islamic Affairs, endorsed by Abdulaziz Al Sheikh, the Grand Mufti of Saudi Arabia, stated that "the green dome shall be demolished and the three graves flattened in the Prophet's Masjid".

A mountain outside Mecca where Muslims believe Muhammed received his first Quranic revelations. The Prophet used to spend long spells in a cave called Hira. The cave is particularly popular among South Asian pilgrims who have carved steps up to its entrance and adorned the walls with graffiti. Religious hardliners are keen to dissuade pilgrims from congregating there and have mooted the idea of removing the steps and even destroying the mountain altogether.

http://blogs.telegraph.co.uk/news/damianthompson/100187644/the-saudis-are-bulldozing-islams-heritage-why-the-silence-from-the-muslim-world/.
Report this as inappropriate
There was an error when submitting your files and/or report.
Inaccurate Inappropriate language Hate speech Illegal Commercial/spam Offensive