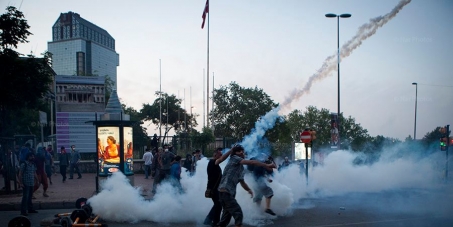 Stop the police violence against green protesters in Istanbul / Turkey

By continuing you agree to receive Avaaz emails. Our Privacy Policy will protect your data and explains how it can be used. You can unsubscribe at any time.
This petition has been created by Ekinusz E. and may not represent the views of the Avaaz community.

Sign this petition
Ekinusz E.
started this petition to
Turkish prime minister Recep Tayyip Erdogan
The only remaining green area in the Istanbul city center is 'Gezi Park' and now it will be demolished by the government in order to build a shopping mall. Hundreds of people joined the meeting to protect the park. They were camping in the park since 3 days. In the second day of the protest police attacked to the protesters with tear gas at 5 am and burned down their tents. Thus a huge meeting is organized on May 30 to support the injured people. Thousands of people gathered to protect the park and share peace messages. But today the situation lost control. Police started using chemical gas and plastic bullets even on old people and tourists. Even though it is not officially accepted, 2 people are dead and more than 100 people are seriously injured. Police blocked the ways to Taksim square and turned off the security cameras to prevent any evidence. But still hundreds of videos and photos are shared on social media. It is obvious that freedom of speech is a big problem in Turkey even if an environmentalist protest like this can become a civil war. The situation is getting worse every minute. Some of the policemen quit their jobs while others are having fun by torturing people. We need your support to protect the green areas and our freedom of speech. ... It has been 11 days since the protests began. According to unofficial numbers 4500 people are injured and many people died. Even though police violence is over in most of the cities, it still continues in Ankara and Hatay. Prime minister Recep Tayyip Erdogan still insists about demolishing the park and threatening the protesters by saying 'We can hardly prevent our voters to attack protesters'. If a prime minister started to threaten people, he must resign. Please keep supporting the peaceful protesters.
Report this as inappropriate
There was an error when submitting your files and/or report.
Inaccurate Inappropriate language Hate speech Illegal Commercial/spam Offensive
×

Today: Ekinusz E. is counting on you