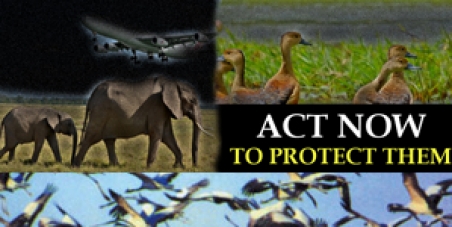 Stop the process of destroying sources of the wildlife in Mattala, Sri Lanka

By continuing you agree to receive Avaaz emails. Our Privacy Policy will protect your data and explains how it can be used. You can unsubscribe at any time. If you are under 13 years of age in the USA or under 16 in the rest of the world, please get consent from a parent or guardian before proceeding.
This petition has been created by Nilantha I. and may not represent the views of the Avaaz community.
x

"In a move, probably without precedent anywhere in the world, the government of Sri Lanka is in the process of destroying sources of water for migratory birds, elephants and other wildlife in the proximity of the recently commissioned Mahinda Rajapaksa Mattala International Airport. The airport is located in the Hambantota District in the arid zone of Sri Lanka, in close vicinity to several sanctuaries including Bundala and Kumana. Therefore the airport is proximate to the flight paths of migratory birds; already two aircrafts have had close shaves when they hit flocks of birds. A week before the airport was inaugurated; a wild elephant attack took place on the main access road (the victim died subsequently). It has been reported that peacocks often wonder into the airport, including the runway, from the sorrounding shrub jungles.

Today: Nilantha I. is counting on you

Nilantha I. needs your help with "Stop the process of destroying sources of the wildlife in Mattala, Sri Lanka". Join Nilantha I. and 2,032 supporters today