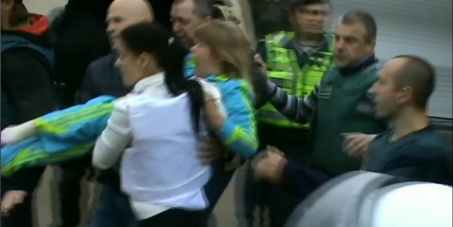 Stop the ring of pedophiles in Lithuania

By continuing you agree to receive Avaaz emails. Our Privacy Policy will protect your data and explains how it can be used. You can unsubscribe at any time. If you are under 13 years of age in the USA or under 16 in the rest of the world, please get consent from a parent or guardian before proceeding.
This petition has been created by Bevardis B. and may not represent the views of the Avaaz community.
x

Sign this petition
Bevardis B.
started this petition to
Mr. Jean ZERMATTEN, Chairperson of Committee on the Rights of the Child

I am a citizen of Lithuania. I can't tell my name because my Government and special agencies can cope with me. We Lithuanians honestly and peacefully struggled with former USSR and declared our independence on March 11, 1990. Since that time we are officially independent state, but large scale corruption and brainwashing are said to be common in our State:

Moreover, alleged pedophile ring secretly found a good place to thrive in Lithuania, because corrupt high ranking people possibly protects them. 3318 children are missing in Lithuania (http://www.delfi.lt/news/daily/education/lietuvoje-nesimoko-per-3000-vaiku-ir-nezinoma-kur-jie-yra.d?id=57978436). Lithuanian people wouldn't know much about pedophilia in our country if the one pedophilia case is not exposed to the public, but there may be thousands of cases like this.

In this case, Lithuanian State Court released a court order which warrants the abused 8 year old girl Deimantė Kedytė to be taken away from her protectress aunt Neringa Venckienė and return to her mother who is suspected for pimping her out to pedophiles (high ranking pedophiles including court judges, wealthy businessmen and political representatives). On May 17, 2012, the Lithuanian police stormed the home in which Deimantė had been kept safe with her aunt. 240 police officers with the assistance of the mother kidnapped Deimantė by using physical and psychological force, snatched the girl out of her loving home. 39 protestors have been arrested. Gas, electric-shock and other violence was used against peaceful unarmed people:

No serious attempt of an investigation of the high ranking pedophile clan has ever been made. Lithuanian Courts made countless brutal violations of Constitution of the Republic Lithuania and Declaration of the Rights of the Child. Now the girl with her mother are protected by the state security in secret location in foreign country.

Help to save her life, offer her the necessary protection, and ensure her future. We believe that the transfer of the girl who is the main witness to the persons who allegedly organized and contributed to her sexual abuse will prevent the execution of a fair and fast investigation and will allow the responsible people to escape legal responsibility for their actions. We kindly ask you to take all possible and proper measures to remind the Government of Lithuania of its obligations under the Convention on the Rights of the Child of the UN to ensure the proper investigation in cases of sexual abuse of children, and make the related persons assume responsibility for their actions. Please help Deimantė, because if this case is properly investigated, it is likely that other cases of pedophilia in Lithuania will also be revealed, so the ring of pedophiles can brake.

The Biggest Corruption And Pedophilia Scandal In Eastern Europe (veritasll.org):

Today: Bevardis B. is counting on you

Bevardis B. needs your help with "Stop the ring of pedophiles in Lithuania". Join Bevardis B. and 922 supporters today