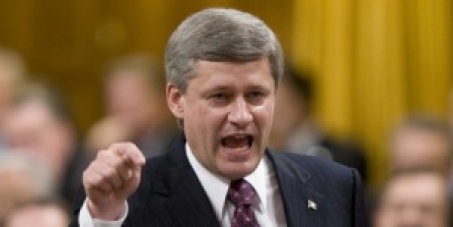 The Appeal of Conscience Foundation, founded by Rabbi Arthur Schneier in 1965, has worked on behalf of religious freedom and human rights throughout the world. This interfaith coalition of business and religious leaders promotes peace, tolerance and ethnic conflict resolution. The Foundation believes that freedom, democracy and human rights are the fundamental values that give nations of the world their best hope for peace, security and shared prosperity.

The one common theme throughout Stephen Harper's elected career is his absolute disdain for democratic principles, human rights, and religious freedom.

A laundry list of his offenses to human rights and democratic principles is long. Some transgressions are:
- allowing rendition of Afghan prisoners of war to the mercy of torture at the hands of Afghan authorities
- failure to seek the release of falsely imprisoned Canadian citizens (Omar Khadr)
- boisterous support for the (false) "weapons of mass destruction" justification for the invasion of Iraq
- two instances of prorogation of Parliament rather than face votes of non-confidence
- systematic electoral irregularity in the last Canadian general election which is being investigated as fraud
- dismantling the International Centre for Human Rights and Democratic Development (Rights & Democracy), which for 24 years had promoted democracy and monitored human rights around the world
- in 2010, Harper slashed funding for the Canadian Human Rights Commission so deeply that the agency had to close its offices in Toronto, Vancouver and Halifax
- In 2009, the prime minister approved cutting funds to Kairos, an organization of church groups that advocated for human rights, after it criticized Israel for bombing a Gaza health unit

These examples clearly show that Stephen Harper is bereft of any respect for human rights, democracy, or religious freedoms.

For the Appeal of Conscience Foundation to give Stephen Harper any award, let alone a World Statesman award makes a mockery of their principles, goals, and aims.

Today: Kimball F. is counting on you