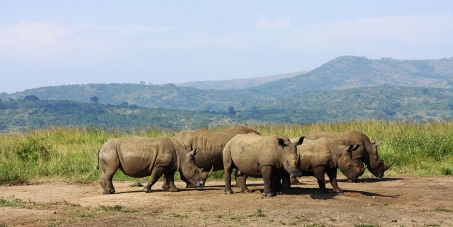 Say NO to Ibutho Coal and its Fuleni Anthracite Project!

By continuing you agree to receive Avaaz emails. Our Privacy Policy will protect your data and explains how it can be used. You can unsubscribe at any time. If you are under 13 years of age in the USA or under 16 in the rest of the world, please get consent from a parent or guardian before proceeding.
This petition has been created by Ubunt U. and may not represent the views of the Avaaz community.
x

Join us in saying a resounding NO to the desecration of the iMfolozi Wilderness Area by the proposed Fuleni coal mine just 40 metres from the boundary of this world-renowned Protected Area.

The iMfolozi Wilderness Area, lies at the heart of the Zulu Kingdom and was sacred to the Zulu people in the time of Shaka. Itis also situated in the historic Hluhluwe-iMfolozi-Park (HIP), the oldest protected area in Africa, proclaimed in 1895, and the core of conservation in KwaZulu-Natal. It was home to the last remaining White Rhino in the 1890s and currently supports the densest concentration of rhino in the world but its rhino population is under constant threat of being slaughtered for rhino horn for the insatiable medicine trade in China and Vietnam. The mine will irreparably compromise the integrity of the wilderness area and make it easier for poachers to enter the park.

Since the proclamation of the iMfolozi Wilderness Area in 1958, many thousands of local and international visitors have shared the excitement of a wilderness trail and slept on the African soil, surrounded by the sounds of the African bush and walking along natural game trails, without any evidence of other humans. This will soon be replaced with the noise, lights and pollution of the Fuleni Mine - if we let iButho Coal get the green light to mine. It will also sabotage a nationally approved plan and a global strategy supporting links between wild places and sustainable livelihoods of neighbouring communities.

This irreplaceable gem is the place that forged the unique friendship between Dr Ian Player and Magqubu Ntombela. Ian Player, the famous conservationist who started the Dusi canoe marathon in 1951 and established the first wilderness areas in South Africa, is best known for saving the white rhino from extinction in the 1960s.

Magqubu Ntombela comes from a courageous line of Zulu warriors and became Ian Player’s greatest mentor. He is recognised and respected in KZN as an important role model for the youth, and his nearby homestead is much-visited by wilderness trailists.

South Africa has no shortage of mines but a unique wilderness area with such a rich history can NEVER be replaced.

Read what two people who have been on an iMfolozi Wilderness trail have to say:

“I’ve always lived in cities and now I live in a flat. I had no interest in nature until I went on a Wilderness trail in iMfolozi. Now I am passionate about the environment because I understand we all depend upon it for our survival.” Moses Kilozo

“My iMfolozi wilderness trail was a real breakthrough, a once in a lifetime experience to be away from science, technology, commerce and industry, which promise the magical push-a-button dream world of leisure, luxury and license. Here I could get back to reality, to true life.” ThabangMamonyane

Check our blog for:

- more detailed information about the mine

- a letter of concerns and objections to email to IDM consultants, who are handling the public participation process

Today: Ubunt U. is counting on you

Ubunt U. needs your help with "Say NO to Ibutho Coal and its Fuleni Anthracite Project!". Join Ubunt U. and 7,465 supporters today