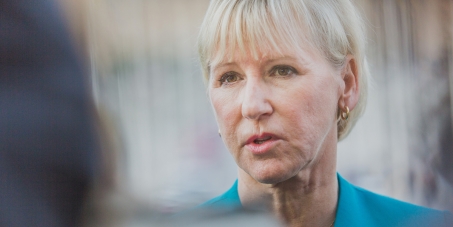 This petition is closed
50 Supporters
Andreas G.
started this petition to
Sweden’s government, opposition, and business
Something quite amazing has happened. Sweden has canceled an arms deal with Saudi Arabia. We are seeing the beginnings of a foreign policy with a backbone. But we cannot take it for granted.

The government in Sweden is now under pressure from several different directions, and the task is hardest for foreign minister Margot Wallström – who is mocked for wanting to pursue a feminist line.

That is why Swedish daily newspaper Dagens ETC has started a petition in favour of a feminist, fair, and brave foreign policy that is rooted in solidarity.

Sign the petition if that is the role you want Sweden to take in the global community.

Sign the petition if you want Swedish foreign policy to be determined by politicians, not by business interests.

Sign the petition if you think foreign minister Wallström deserves your support.

Who knows, if Sweden shows the world what a feminist foreign policy can achieve, maybe other countries will follow…

Dagens ETC will deliver the petition – and all its signatures – to Sweden’s government, to the political opposition, and to the major corporations involved.

Read more about the petition, and about a feminist foreign policy, not to mention the resistance against it:

”We should appoint Wallström the People´s Princess”
http://www.etc.se/ledare/we-should-appoint-wallstrom-peoples-princess

Want to know more about Dagens ETC? Visit us at www.etc.se