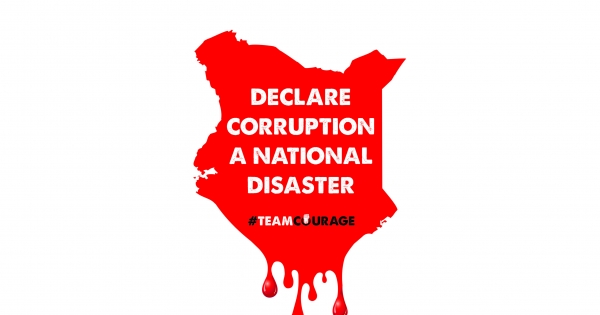 THE PRESIDENT OF KENYA: DECLARE CORRUPTION A NATIONAL DISASTER

Sign this petition
TEAM COURAGE K.
started this petition to
THE PRESIDENT OF KENYA
In the late 1990s Kenya seemed to face an existential crisis brought about by HIV/AIDS pandemic. At the time, the rates of HIV transmission were increasing astronomically and the number of people dying of AIDS was at its peak.

Despite its delayed response, the then leadership took decisive action. In 1999, President Daniel Arap Moi declared AIDS a national disaster.

In an effort to increase HIV/AIDS awareness in 2003, President Mwai Kibaki took part in an anti-AIDS commercial shot on the State House lawn. The following year President Kibaki declared that he was not afraid to get tested for HIV/AIDS. Perhaps his actions were inspired by President Mandela’s , who, in 2002, donned a t-shirt that read I am HIV Positive’ in an effort to end the stigmatization of those living with HIV.
Because of deliberate and diligent efforts made by the government, AIDS is no longer a national disaster. It is estimated that 1.6 million Kenyans (6% of the population) are living with HIV/AIDS and 1.1 million children are orphaned because of the disease.

While HIV/AIDS is no longer a national crisis in Kenya, we are currently being afflicted by a pandemic that affects all 44 million of us. That pandemic is corruption. Decisive action is needed.

We the people are proposing:

1. The establishment of a Corruption Control Council.

3. A public website where we can access wealth declarations for all elected officials and senior civil servants.

4. All State and senior Public Officers must undergo a public “are you corrupt test” – which will be a forum to explain how they earned their wealth.

5. The formation of a well paid and well equipped team of anti-corruption investigators and prosecutors, independent of executive and political interference.

6. The Chief Justice to ensure that corruption and economic crimes cases are heard by specialist courts . The cases should be expedited and handled swiftly to minimise witness tampering, intimidation, and concealment of the stolen assets.

7. Three months moratorium be given to people who have stolen from the government or grabbed public assets (including land).

a. If the stolen assets are returned the suspects will be granted amnesty against prosecution.

b. Amnesty be given to people who return money stashed in foreign countries without questions asked.

8. Reward and protection given to whistleblowers.

We call upon President Uhuru Kenyatta to declare corruption a national disaster and to sincerely institute, at minimum some of the steps outlined above.

If you agree with these statements and would like to see them to fruition, sign this petition. On 1st December we shall deliver the signatures to State House, Gate A.

Today: TEAM COURAGE K. is counting on you