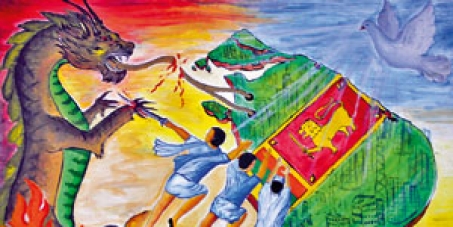 By continuing you agree to receive Avaaz emails. Our Privacy Policy will protect your data and explains how it can be used. You can unsubscribe at any time. If you are under 13 years of age in the USA or under 16 in the rest of the world, please get consent from a parent or guardian before proceeding.
This petition has been created by UAF S. and may not represent the views of the Avaaz community.
x

After the 30 year old bloody war (between LTTE and GSOL) now we seems building up for another one. This time it seems against the second minority the Muslims. The pioneer in the build is an organisation called Bodu Bala Sena, followed by other groups including Jathika Hela Urumaya who is a government ally. These are well funded, organised and highly influential groups. The local media are flooding them with airtime in order to gain popularity through nationalism. The trend is quite dangerous and human causalities will be imminent if this carries on.

The issue is already out of hand. Day in day out many protests and violence are reported. It needs to be stopped by the government as no awareness program seems helping much. The minority has again started feeling un-assured.

In Sri Lanka there are no laws to protect any one from Race related violence. We feel it is the best time to campaign for one before the current trend leads to bloodshed or a war.

Please table a bill in the parliament to INTRODUCE A NEW LAW AGAINST INCITING HATRED BETWEEN RACES OR RELIGION ASAP!!!

This should prohibit all sorts of hate campaigns against any religion or race!

Today: UAF S. is counting on you