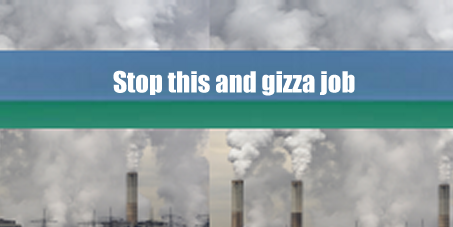 By continuing you agree to receive Avaaz emails. Our Privacy Policy will protect your data and explains how it can be used. You can unsubscribe at any time. If you are under 13 years of age in the USA or under 16 in the rest of the world, please get consent from a parent or guardian before proceeding.
This petition has been created by Geoff B. and may not represent the views of the Avaaz community.
x

A carbon tax to create jobs could be mainstream politics...

At the recent Progress Annual Conference, Phil Collins of The Times, Peter Kellner of YouGov and Mary Riddell of The Daily Telegraph thought that a carbon tax to create jobs could become mainstream politics. The politician on the panel ducked the question.

They should read the article in the latest Fraser Economic Commentary,”The impact of the introduction of a carbon tax for Scotland”. I like this bit:

"Our simulations demonstrate that a carbon tax [ to support employment ] could simultaneously stimulate employment while reducing emissions: the double dividend." and

"Furthermore, in current circumstances, it may be thought desirable to focus the good news by recycling revenues to subsidise employment among the younger age groups who have been most adversely impacted by the recession and its aftermath."

The advantages of a carbon tax to create jobs are:

It creates jobs
-- ideally targetted at the poor and young.

It will curb pollution.

The economics has always been simple – tax “bads” subsidise “goods”. Now the politics will be possible as events show the public just how bad climate change is becoming.

I was surprised Mary, Peter and Phil thought it could be mainstream.
Pity they aren’t politicians.

And "Tax carbon to create jobs for the young."
http://www.brusselsblog.co.uk/tax-carbon-subsidise-jobs-for-the-young/

P.S. Compensate the fuel poor for any extra cost to them? Easy. See http://www.vivideconomics.com/index.php/publications/fiscal-consolidation-and-carbon-fiscal-measures

P.P.S
The Daily Telegraph reported "David Cameron, the British Prime Minister, has written to Australian leader Julia Gillard in support of her planned tax on carbon to combat climate change."

Today: Geoff B. is counting on you

Geoff B. needs your help with "Tax carbon to create jobs.". Join Geoff B. and 57 supporters today