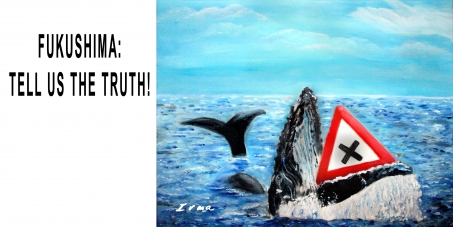 FUKUSHIMA: TELL US THE TRUTH !

By continuing you agree to receive Avaaz emails. Our Privacy Policy will protect your data and explains how it can be used. You can unsubscribe at any time. If you are under 13 years of age in the USA or under 16 in the rest of the world, please get consent from a parent or guardian before proceeding.
This petition has been created by Irma S. and may not represent the views of the Avaaz community.
x

Sign this petition
Irma S.
started this petition to
Tepco, the government of Japan and all politicians around the world
Our concern is growing day by day that dangerous amounts of radioactive water are continuing to leak into the Pacific Ocean and now reached the US coast although you all try to deny this. Alternative news-sites are telling us things like ´Dead sea creatures cover 98 percent of ocean floor off California coast; up from 1 percent before Fukushima´ while the mainstream media
once again has failed to even mention the reality that Fukushima’s effects have already been documented within the United States warned by several scientists around the world.

We all have a right to know what´s going on because it is our future, for our children and grandchildren. The media runs around without a clue and it is absolutely essential that we need to know the real truth, and nothing but the truth right now, so together we can try to avoid more damage to mother earth and her living beings who are dying day by day, time is up now!

Today: Irma S. is counting on you