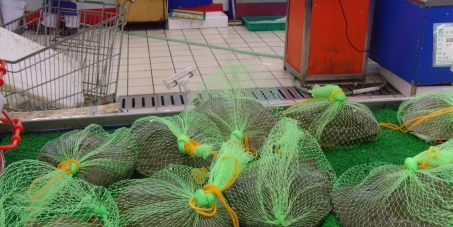 The horror of Tesco selling live, packaged turtles in their supermarkets.

By continuing you agree to receive Avaaz emails. Our Privacy Policy will protect your data and explains how it can be used. You can unsubscribe at any time. If you are under 13 years of age in the USA or under 16 in the rest of the world, please get consent from a parent or guardian before proceeding.
This petition has been created by Dominic N. and may not represent the views of the Avaaz community.
x

We are absolutely horrified at the barbaric sale of live, packaged turtles by Tesco (and other massive supermarkets most of us use) in China and demand that you set example and STOP this horrific business NOW.

Millions of people have spent billions making Tesco what it is, but would they have if they knew of Tesco's total disrespect for animal welfare just to make money?

Tesco is responsible for all stages of these creatures' tortured existence from being farmed in terrible conditions, packaged in boxes to live on supermarket shelves gasping for life, to their customers' no doubt random slaughtering techniques. When the turtles are killed in the shop they are butchered by having their heads cut off and crushed with no pre-stunning. At times they don't die for a hour.

Hold Tesco to account and join One World Wildlife in demanding that Tesco reassess their business ethics and stop selling live creatures in their supermarkets. Only a mighty effort will make them take note.

Tesco stores also sell live bull frogs, kept in heartbreaking conditions, piled one on top of the other. The suffering inflicted on these animals is so extreme that if it took place in the UK, Tesco directors would undoubtedly face criminal charges. In addition to the most horrendous cruelty, the live turtle and frog trade is said to be acutely environmentally destructive, contributing to the rapid extinction of the Chinese soft shelled turtles which increasingly is being used to supplement farmed turtles.

Trustee of One World Wildlife.

Image taken a few years ago. Latest sources say turtles are kept in tanks in Tesco stores, and wrapped in cling-film or slaughtered first for customers on request.

Video: Taken by Care of the Wild in 2008: https://www.youtube.com/watch?feature=player_embedded&v=zENVVEljsHY

Today: Dominic N. is counting on you

Dominic N. needs your help with "The horror of Tesco selling live, packaged turtles in their supermarkets.". Join Dominic N. and 54,906 supporters today