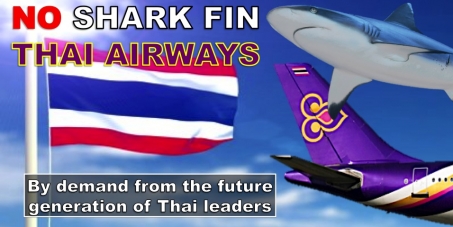 Board of Directors, Thai Airways

My name is Ob Saiyavath and I am a Thai student attending an International school in Bangkok.

As a Thai student, I am deeply concerned to learn that a letter to Thai Airways in August 2013 from worldwide environmental organizations, outlining problems with the shark fin trade and asking whether the airline is willing to ban this cargo, has yet had any response. I am concerned that Thai Airways still hasn't clarified its policy on shark fin and is not taking this issue seriously.

WHY IS THIS IMPORTANT TO ME?

Shark populations are declining around the world. Loss of sharks due to illegal and overfishing is particularly concerning. As apex predators, they play an important role maintaining healthy marine ecosystems. Sharks have been protecting our oceans for 325 million years. Now one quarter of all sharks are threatened with extinction. If this is allowed to continue, disappearing shark populations will have a catastrophic effect on the marine ecosystems that we depend on for our own survival.

Shark sightings in Thai waters have declined more that 90% in the past seven years alone, according to data from scuba divers. Numerous jobs in Thailand depend on healthy marine ecosystems, which depend on sharks. If Thailand continues to lose sharks, coral reefs could decline and divers may go elsewhere. Tourism and fishing livelihoods will be negatively effected.

WHY DOES THIS CONCERN THAI AIRWAYS?

Airlines are inadvertently part of the destructive shark fin trade by shipping tons of fins to markets across Asia. Thousands upon thousands of sharks are killed unsustainably for this cargo. Ending any involvement in the shark fin trade is a great way for our national airline - THAI Airways - to support marine ecosystems, tourism and coastal communities. By continuing to transport shark fin, Thai Airways is directly contributing to the destruction of our marine wildlife and threatening our ecosystems and tourism industry. Other airlines are acting to prohibit shark fin, due to ecological concerns.

WHY THIS SHOULD CONCERN THE THAI GOVERNMENT?

I am delighted to see that the Thai Military Government is taking a very strong position on the illegal wildlife trade particularly with the ivory trade. I hope that the government will also focus its attention to the shark fin trade soon since so many species of sharks are endangered. In 2013 Bangkok hosted CITES where more shark were listed for greater protection against international trade. I think that further action is required by Thai Airways to review their policies regarding the transportation of shark fin to comply with these new trade restrictions.

Over 120 Hotels in Thailand have publicly announced that they have banned or removed shark fin from their menus. Every month this number of hotels and restaurants is growing.

I have been appointed to represent all Thai International schools and thousands of students in Thailand, additionally I represent all other concerned individuals and conservation organizations who stand behind me for shark conservation. Save Sharks Network Thailand is my campaign for this petition.

We deserve a responsible and ethical flagship airline. Encourage Thai Airways to be the next shark fin free airline!

Help me urge Thai Airways to take this issue seriously.