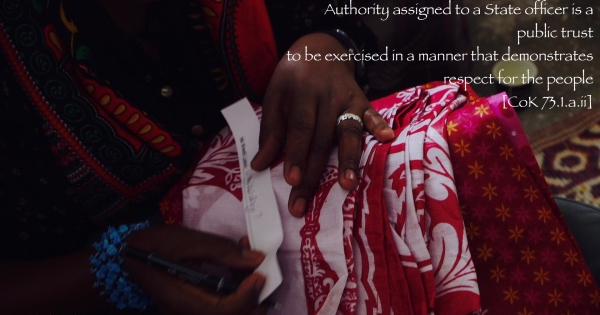 Article 3 Petition: To Respect, Uphold & Defend the Constitution of Kenya

By continuing you agree to receive Avaaz emails. Our Privacy Policy will protect your data and explains how it can be used. You can unsubscribe at any time. If you are under 13 years of age in the USA or under 16 in the rest of the world, please get consent from a parent or guardian before proceeding.
This petition has been created by #WeAre52pc K. and may not represent the views of the Avaaz community.
x

WHEREAS the Supreme Court of Kenya in Advisory Opinion No. 2 of 2012 advised that Parliament that the constitutional deadline to enact legislation to implement Article 81(b) was 27th August 2015;

WHEREAS despite the provisions of the Constitution, including among others, Articles 2, 3, 10, 27, 28 73, 81, 94, 261 and the Fifth Schedule; Parliament on at least two occasions failed to pass a law to implement Article 81(b) and thereby comply with the deadline advised by the Supreme Court Advisory Opinion 2 of 2012 as well as required by the Constitution;

WHEREAS On 29th March 2017 in Petition No. 371 of 2016 the High Court ordered that “… if Parliament fails to enact said legislation within the said period of SIXTY (60) DAYS from the date of this order, the Petitioners or any other person shall be at liberty to petition the Honourable the Chief Judge to advise the President to dissolve Parliament. ” [Centre for Rights Education and Awareness & another v Speaker of National Assembly & 5 others [2017] eKLR]

WHEREAS despite the High Court order of March 29th, 2017 Parliament nevertheless refused, failed and/or neglected to comply with the Constitution and Orders of the High Court and pass legislation to implement Article 81(b);

WHEREAS on 8th August 2017 there was a general election as provided in the Constitution;

WHEREAS despite the swearing in of the 12th Parliament on 31st August 2017 and the subsequent election of Speakers, neither house has provided any indication of an intention to prioritize the enactment of Article 81(b) legislation to purge the non‐compliance with the Constitution and superior court orders.

WHEREAS Parliament is also under an obligation to enact legislation to ensure the inclusion of marginalized groups per Article 100 among them women, persons with disabilities, youth and ethnic minorities and has failed, refused and or neglected to act in accordance with the Constitution;

WE THE UNDERSIGNEDTHEREFORE, by this petition and in exercise of our obligations under Article 3(1) “to respect, uphold and defend this Constitution”.

HEREBY REQUEST that you immediately invoke your constitutional authority pursuant to Articles 261 (7) and in accordance with Articles 1, 2, 3 and 10, among others and advise the President that&colon

1. Parliament is in default of the Court Orders issued by the High Court in Petition No. 371 of 2016, and in violation of the timelines set out by the Supreme Court in Advisory Opinion No. 2 of 2012 and in further violation of the constitutional timelines provided for the enactment of legislation to implement Articles 81(b) and 100;
2. Parliament is in violation of the explicit provisions of Article 3(2) “Any attempt to establish a government otherwise than in compliance with this Constitution is unlawful.”
3. Due to the foregoing failures, Article 261 (7) compels you to advise the President to dissolve Parliament forthwith and thereby uphold the sovereignty of the people as enshrined in the Constitution of Kenya 2010.