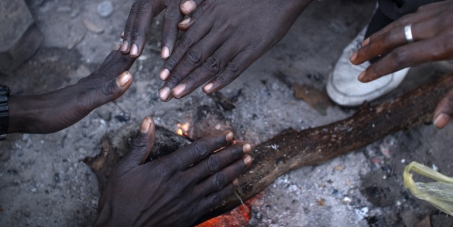 The Commissariat for Refugees and Migration, UNHCR + the Serbian Government: Fulfill the fundamental rights of asylum seekers in Serbia

By continuing you agree to receive Avaaz emails. Our Privacy Policy will protect your data and explains how it can be used. You can unsubscribe at any time. If you are under 13 years of age in the USA or under 16 in the rest of the world, please get consent from a parent or guardian before proceeding.
This petition has been created by lajfba L. and may not represent the views of the Avaaz community.
x

Sign this petition
lajfba L.
started this petition to
The Commissariat for Refugees and Migration, UNHCR + the Serbian Government

Because right now hundreds of asylum seekers are being deprived of accommodation, food and safety. They are forced to live in the woods outside Bogovadja asylum centre, which is full to capacity. The relevant authorities are not addressing the situation and snow will soon fall!

1. a) Urgent provision of accommodation and food for the asylum seekers, who have been living for several months outside the Asylum center, in the nearby forests, without necessary means, exposed to great cold, malnutrition, diseases, physical and psychological torture.

The problem of accommodation could be solved permanently by opening a new asylum center but also by providing a temporary accommodation of the asylum seekers until the more permanent solution becomes available.

b) Assurance that all the people will be safe and protected until the previous request is fulfilled (above all, that they would be protected from illegal deportations to the countries from which they entered Serbia, since the asylum seekers have testified that in 2012 even those who had been holding valid asylum applications issued by the police, had been deported).

2. a) Replacement of the manager of the center, director Stojan Sjekloća, because of the lack of transparency in his managing the center, justified suspicion of corruption, psychological unstability and lack of expertise and compassion.

The testimonies about the work of Stojan Sjekloća, gathered during the last year and a half, can be found below.

b) Ensuring that the new center manager is an honest, professional and responsible person, with foreign language skills and an insight into the problems of refugees (in their home countries, in the countries of transit and while on the territory of the Republic of Serbia). Besides these qualities, it is of great importance that the new manager also has a sense for working with people, a sense of understanding and compassion.

TESTIMONIES OF ASYLUM SEEKERS AND ACTIVISTS ABOUT THE WORK OF THE WARDEN OF THE ASYLUM CENTER IN BOGOVAĐA - STOJAN SJEKLOĆA, COLLECTED OVER THE PAST YEAR AND A HALF

In September 2012, it was reported that the management of Center for asylum seekers in Bogovađa was asking for money from the immigrants so they could be situated at the facilities.

This was witnessed by many asylum seekers, along with former employees of the Center, and reported to the Commissariat for Refugees and Migration. The case was publicized by media, (National radio and television of Serbia, E-novine, Danas, Kurir, Novosti, S Media), but eventually remained unsolved, and the situation at the Center didn’t change.

The registered asylum seekers, which are not situated at the Center, because of the insufficient capacities, are sleeping in the surrounding forest. In November 2013, the Warden of the center, Stojan Sjekloća, denied them meals provided by the Red Cross for two days, in order to “discipline “ them for “not standing in the line for food appropriately”.

A similar example of denying the asylum seekers humanitarian aid was withholding the donations (mostly clothes) inside the Center’s storage. Last winter, the organization “Pesčanik” along with a group of activists organized a humanitarian action and managed to acquire a significant amount of winter clothes. Upon delivering this shipment to the Center, the Warden ordered the clothes to be locked in the Center’s storage. We found out from the Center’s inhabitants that they or the registered asylum seekers in the surrounding woods never received these clothes.

Both cases clearly show the restricted access to humanitarian help. This imposes the question: by what law, regulation, or by whose authorization did the Warden Stojan Sjekloća choose to act in such a manner, especially when it comes to donations from the citizens?

According to the asylum seekers, there are many cases of inappropriate behavior towards the inhabitants of the Center. This happens along with a number of groundless expelling from the Center. This was also reported by the media on several occasions. According to the testimonies of several inhabitants, Stojan Sjekloća on numerous occasions has displayed racist behavior, insulted and humiliated the people in the asylum seeking process, and consumed alcohol in the workplace.

Aside from the irregularities in the Center’s management mentioned above, it is necessary to reconsider the position of the warden Stojan Sjekloća: Considering his apparent incompetence, insensibility to the problems the asylum seekers, and moreover, the fact that he doesn’t speak a single foreign language, which makes any immediate communication with the asylum seekers impossible.

Along with these problems, the authoritarian attitude and the lack of transparency in management indicate the necessity of reacting against and replacing the Centers management, and its warden Stojan Sjekloća.

Today: lajfba L. is counting on you

lajfba L. needs your help with "The Commissariat for Refugees and Migration, UNHCR + the Serbian Government: Fulfill the fundamental rights of asylum seekers in Serbia". Join lajfba L. and 473 supporters today