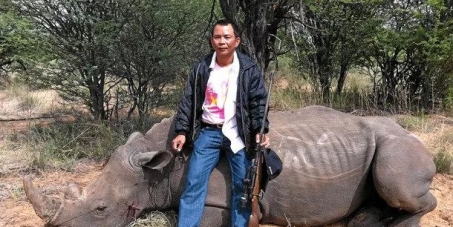 The Constitutional Court of South Africa: investigate Judge Navsa and his judgement in sca_2014/sca2014-131

By continuing you agree to receive Avaaz emails. Our Privacy Policy will protect your data and explains how it can be used. You can unsubscribe at any time.
This petition has been created by Brett C. and may not represent the views of the Avaaz community.

Sign this petition
Brett C.
started this petition to
The Constitutional Court of South Africa
At the height of the horrific crisis threatening the elimination of Rhino from South Africa, Constitutional Court Judge Navsa has reduced the sentence of a convicted Thai criminal poacher, Chumlong Lemtongthai, deputy of Vixay Keosavang, the world's biggest killer of animals, has been found guilty of killing 26 Rhino under false pretences. The sentence had already been reduced by the High Court! This criminal is not without influence nor means!! This decision reaches into the heart of the highest organ of South Africa's Judicial system in South Africa and threatens to destabilise law and order in South Africa! The work of the many who go into investigating and prosecuting criminals is being trashed!! We must investigate and have the corrective measures implemented! For our Country, for our Wildlife, for our honest and loyal police, prosecutors and rangers!

Today: Brett C. is counting on you

Brett C. needs your help with "The Constitutional Court of South Africa: investigate Judge Navsa and his judgement in sca_2014/sca2014-131". Join Brett C. and 3322 supporters today