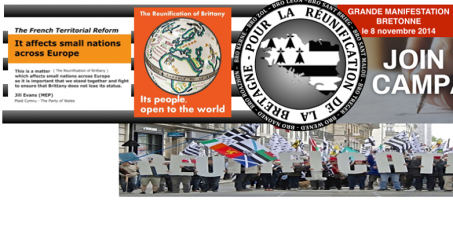 Give Brittany, a Celtic Nation, its freedom!

By continuing you agree to receive Avaaz emails. Our Privacy Policy will protect your data and explains how it can be used. You can unsubscribe at any time. If you are under 13 years of age in the USA or under 16 in the rest of the world, please get consent from a parent or guardian before proceeding.
This petition has been created by Denise L. and may not represent the views of the Avaaz community.
x

A Reunification rally will be held in Nantes on September 27, 2014.

What is necessary and very important is your signature (email address) in order to help raise the total amount of signatures required. Thank you so much for signing and please pass this Petition on to others. It will be greatly appreciated.

Resources and contact information are located below the Petition.

Brittany, a Celtic Nation on the Northwestern side of France, has been fighting for her independence from France since day one. Wales, Cornwall, Scotland, Ireland, the Isle of Man, and other lesser known, are also Celtic Nations.

The Bretons are protesting for reunification of Brittany but now France is talking about completely merging Brittany into France which will be devastating to the culture, social and tax. The Bretons are, by nature, a highly enterprising, imaginative and hardworking people. Brittany is a naturally rich nation suppressed by France where Parisians turn their backs to the sea. The Reunification of Brittany has become highly topical.

Adding insult to injury, the French Government will also make a new law forbidding any department, in the future, to change from one region to another. This will mean that Brittany will forever remain behind closed doors and forgotten by other nations and the world. However, antidemocratic that might be, it is also aimed at Brittany so that the 1941 territorial butchery can never be officially questioned. The Bretons are statistically the most well educated and intelligent section of the population of geographical France, and as such, they have always chosen a peaceful path towards their aspirations.

A large majority of the Bretons are in favor of having a Region of Brittany composed of 5 departments including Loire-Atlantique. This reflection has shown that the inhabitants of the 4 departments have come out strongly in support of Brittany with 5 departments.

A sample of 807 individuals, represented the population of the Region of Brittany were interviewed by phone. their ages ranged from 18 years and older. It has been revealed, through an independent polling agency (LH2/BVA), that:

55% wish to have Brittany reunified.

6% of the Bretons wish to have Brittany merged within a « Great West ».

History of Brittany, the Celtic Nations and their Flags - http://www.capitalceltic.com/celtic-nations.shtml

Who Are The Bretons - http://www.everyculture.com/wc/Costa-Rica-to-Georgia/Bretons.html

Who are the Bretons - http://en.wikipedia.org/wiki/Breton_people