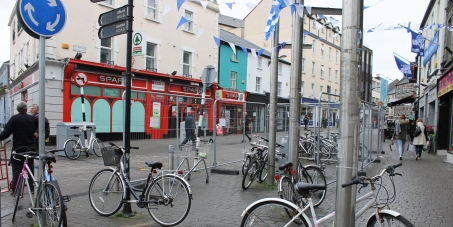 By continuing you agree to receive Avaaz emails. Our Privacy Policy will protect your data and explains how it can be used. You can unsubscribe at any time. If you are under 13 years of age in the USA or under 16 in the rest of the world, please get consent from a parent or guardian before proceeding.
This petition has been created by An M. and may not represent the views of the Avaaz community.
x

Sign this petition
An M.
started this petition to
Galway City Council, Minister Paschal Donohoe, Dept. of Transport
The Galway City Council and The Department of Transport are removing a number of free public stands from the streets of Galway. These are used by people every day and there is already an under-supply of them. These stands will be replaced by "Coke Zero" Bike hire scheme. No intention to replace the free public bike stands has been announced.

We want:
1) new free public bike stands installed in the Mainguard Street area where some are currently being removed;
2) new free public bike stands installed at Ravens Terrace where recent roadworks removed the previous ones;
3) Galway City Council to prioritise the installation of bicycle facilities in Galway City, especially in the pedestrian areas of the old medieval centre.

Today: An M. is counting on you