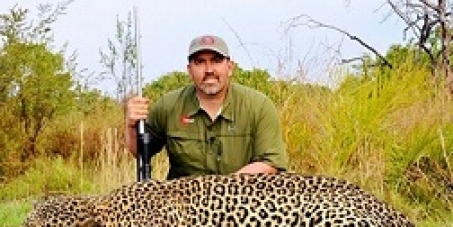 Governments of Tanzania, Mocambique and South Africa: Revoke hunting permits to Neilson and ALL trophy hunters

This petition is closed
50 Supporters
Chris G.
started this petition to
The Governments of Tanzania, Mocambique and South Africa
It would be totally sexist of us to have Melissa Bachman and Kendall Jones exposed and have this murderer continue his diabolical trophy hunting.
All the accolades he so proudly presents on his Fb page are nothing but a scam by a string of so called "Doctors" in nature conservation. They are ALL Dr. Dolittles as far as conservation is concerned, in fact they are party to the extermination of the African big cats.
That leopard was one of the rarest big cats left in Africa, may it's soul bring bad Karma on you and all your abhorrent followers.
To quote the Kenyan Government: "This is a barbaric relic of colonialism"
And now you're coming for your 14th lion, already selected and
even zoned where it lives. Canned hunting at its best.
You have all but depleted all wildlife in your native USA, beside also committing the most heinous and atrocious genocide in world history against your native Indian tribes. Those who lived by and respected nature.
Stay where you are, and smother in your own creation......YOU ARE NOT WELCOME IN AFRICA.

(I have blocked out the bloodied face of the Leopard for sensitive viewers.)

Today: Chris G. is counting on you