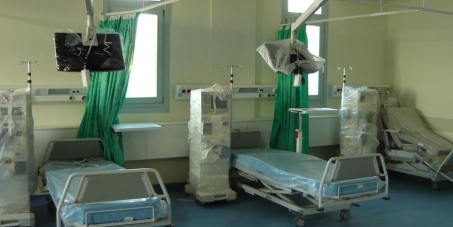 The Greek Government: Open the Hospital of Santorini island

By continuing you agree to receive Avaaz emails. Our Privacy Policy will protect your data and explains how it can be used. You can unsubscribe at any time. If you are under 13 years of age in the USA or under 16 in the rest of the world, please get consent from a parent or guardian before proceeding.
This petition has been created by South S. and may not represent the views of the Avaaz community.
x

Sign this petition
South S.
started this petition to
The Greek Government
Since 2011, a brand new hospital is constructed on Santorini island in Greece, but has not been put into operation yet, due to the Greek Economic Crisis and the lack of political will to solve the problem. Santorini is one of the most famous & touristic islands in Greece, known for it's beauty, voted several times as the most beautiful island in the world and in Europe by travel magazines and organizations. 15.000 locals stay on the island all year around, and aprox. 2million tourists visit the island every season. Whilst, there is only basic healthcare services, provided by one public health center and one private (and very expensive) medicine center. In case of emergency incidents, patients have to be flown with the municipality airplane to Athens or nearby Crete hospitals. Local people are deprived of any sufficient healthcare, women are forced to move to Athens in order to give birth, people are lacking of fundamental security in their lives, because there is no hospital on the island.
The new hospital that is closed, is fully equipped already with maternity rooms, operation rooms, emergency, exam labs and much more, fully ready to work!!! Help us raise awareness!!!!!
Report this as inappropriate
There was an error when submitting your files and/or report.
Inaccurate Inappropriate language Hate speech Illegal Commercial/spam Offensive
×

Today: South S. is counting on you