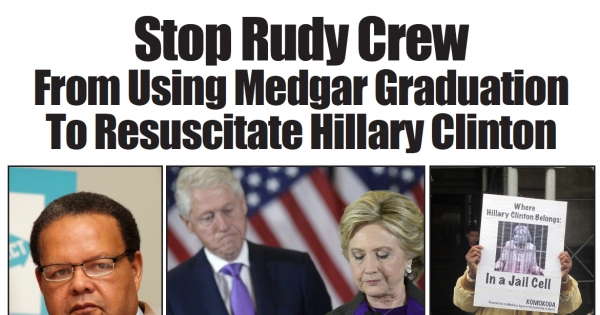 This petition is closed
50 Supporters
Fabienne H.
started this petition to
Medgar Evers College President Rudy Crew; CUNY Chancellor James Milliken; Haitian, Caribbean and African-American communities and all people of conscience.
Rudy Crew, the President of Medgar Evers College plans to have Hillary Clinton deliver the Commencement Speech at the school's June 8th 2017 graduation ceremony at Brooklyn's Barclays Center and to give her an Honorary Doctorate despite her deplorable record towards the Black Community at home and abroad. Hillary said that Black Youth are "super predators with no conscience, no empathy and they must be brought to heel." As U.S. Secretary of State she supported coups and assassination of foreign leaders. The Clintons along with their criminal Clinton Foundation milked billions of dollars donated for Haiti's reconstruction after the 2010 earthquake and interfered with Haiti's democratic elections.

Say No To The Clintons Exploiting The Black Community.


Please sign this petition and then call Rudy Crew at
718‐270‐5000 and CUNY Chancellor James Milliken at
646‐664‐9100 to tell them that our community will not allow this desecration of our children's graduation and of Medgar Evers' legacy. If Hillary comes we will protest both outside and inside.