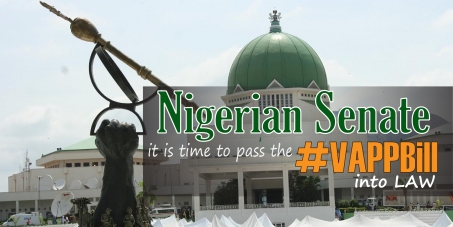 The Nigerian Senate: Pass the VAPP Bill into Law

By continuing you agree to receive Avaaz emails. Our Privacy Policy will protect your data and explains how it can be used. You can unsubscribe at any time. If you are under 13 years of age in the USA or under 16 in the rest of the world, please get consent from a parent or guardian before proceeding.
This petition has been created by #Choice4Life A. and may not represent the views of the Avaaz community.
x

The Violence Against Persons Prohibition Bill (VAPP Bill) which seeks to protect Nigerians especially women and children from all forms of violence in both private and public spaces has been before the Nigerian Assembly since 2002 and currently before the Senate. On 16 October, 2014 it passed through its second reading at the floor of the Senate in response to the demands of the civil society and Nigerians to have the bill passed. At this time we have only about 6 months (before the expiration of the current Senate) left to ensure that VAPP Bill is passed into LAW by the Senate or have it returned before it in 2015 when a new Senate is inaugurated. With the recent increase in all forms of violence (physical assault, rape, incest, domestic violence, kidnap, abduction, e.t.c) especially against women and children in our society, Nigerians and the Nigerian State can't afford to wait for the next legislative term to pass the bill while it lets offenders and culprits go free and their victims groan in agony because we haven't got a better Law to bring justice to bear. Join in calling on the Nigerian Senate to do what is necessary to pass the VAPP Bill before the end of its current term. The time to take act(ion) is now!