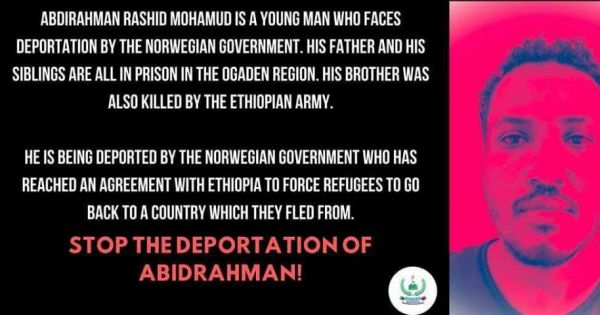 By continuing you agree to receive Avaaz emails. Our Privacy Policy will protect your data and explains how it can be used. You can unsubscribe at any time. If you are under 13 years of age in the USA or under 16 in the rest of the world, please get consent from a parent or guardian before proceeding.
This petition has been created by Abdi M. and may not represent the views of the Avaaz community.
x

Sign this petition
Abdi M.
started this petition to
The Norway government
Young Mr Abdirahman Rashid Mohamud is a Somali human rights defender from the Ogaden. All his Familiy are in detention due to his advocacy and one of his brothers was killed. He sought asylum in Norway and the Norway government is planning to deport him to Addis claiming erroneously that he will be safe in Addis. It against International Law to forcefully deport an asylum seeker to a country where torture and degrading human rights abuses are practiced like Ethiopia. The Norwegian government is breaching its own lies and international conventions it signed. He is in a state of shook and his health is deteriorating due to how he has been treated in detention for the last two weeks.
We appeal to all human rights defenders to stand for him and urge the Norwegian prime minster to take urgent action to stop this violation of human rights in her country. The Norwegian country can refuse him asylum , but they have no right to deport him to his doom. let them pass him to UNHCR who will seek a new safe haven for him
Report this as inappropriate
There was an error when submitting your files and/or report.
Inaccurate Inappropriate language Hate speech Illegal Commercial/spam Offensive