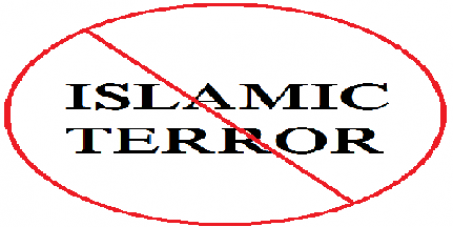 The President of Sri Lanka : We call upon you to stop Islamic terrorism on the rise in Sri Lanka

By continuing you agree to receive Avaaz emails. Our Privacy Policy will protect your data and explains how it can be used. You can unsubscribe at any time. If you are under 13 years of age in the USA or under 16 in the rest of the world, please get consent from a parent or guardian before proceeding.
This petition has been created by Muragala T. and may not represent the views of the Avaaz community.
x

We seek the support of the world civilians and governments....

To urge the government/ President of Sri Lanka to act immediately and contain the extreme groups, maintain communal harmony and protect the victimized majority and stop violation of the religious rights of majority by Islamic hate propaganda and violent actions.

All racist Muslims including Islamic politicians under the name of Sri Lanka Muslim Council (SLMC) organized by Jihadists under the various disguise like Politicians, Media man, Ulamas, Muslim Mosques, NGOs are merrily destroying the peace of Sri Lanka and bringing shame to the very religion they are preaching, so called "Religion of Peace". Over hundreds of thousands of reported/unreported incidents of intimidation, violence and destructions have been caused by the Muslim Minority in hiding ever since they were given refuge in Sri Lanka by Senarath the Buddhist king.

Once in our past, Sri Lankan costal belt was captured by Portuguese. Muslim traders in Portuguese era were being slaughter ed by Portuguese as they have correctly evaluated the economical threat the Muslims can cause to their trade. Masses of tribal Muslims were on the run. They ran to Sinhala Buddhist king to seek refuge in his well guarded kingdom. As a king with infinite compassion gifted to him by his religion, He made an error of unthinkable magnitude with this tribal community. The great king offered Muslims refuge in his kingdom and got their agreement to blend with Sinhala Buddhist society in 2 generations in return. However the king never knew the Quranic teachings of Islamic Halaal false promises for their advantage. Just as Jihadists widely practice in Gaza and all over the world, they agreed to king just to get what they wanted, never to give what they promise like hardcore Muslims always do. They correctly pay heavy prices in Gaza by Israel to which the whole world should support. However Muslims try to win this part of the world with same dirty tricks taught to them by Islam. We cannot fight Muslims like brave Israel do. But we need the support of whole world to get rid of this menace once and for all.

If you think this is not a problem of you just because you are not a Buddhist, Please watch these videos to see how bad the future for you due to world Muslims,

(Please copy above links to your browser and watch)

Going back to Sri Lankan history,...Instead of keeping the promise to King, The typical Muslims started working against not only to Kings Nation, but also to the entire country. The tribal Islam in Sri Lanka did all they could to contribute to population Jihad, All kinds of dirty and shameful living, smuggling to make Halaal earnings, slowly establishing own and disgusting law exclusively for them (including promoting polygamy, some cruel anti-democratic Sharia laws like caning for leaving Islam etc.), Love Jihad to steal majority Sinhalese girls, Promoting of Democracy to non-Muslims to get them to Islam and secretly applying cruel Sharia within the society to keep Muslims from leaving Islam, Creeping into justice system to corrupt it, Creeping into parliament and all the major political parties to have handle on the country's politics. Economically destroying Sinhala Buddhist Businessmen who never agree with smuggling as it is wrong living for them. Muslims mosques offer collected money in tribal society to run dirty and unethical Islamic Business even at complete loss until the Sinhala Buddhist business around is completely dead and gone. Buy land double or triple the real value to build tribal Islamic mosques. Buy corrupt politicians including the prime minister of Sri Lanka to back their Jihad agenda. Even dirty monk named Watakera Wijitha was bought by Muslim money and used for a self staged drama to mislead masses. The man found to be insane by doctors later.

(Please copy above links to your browser and read)


Every 5 Islamic families that pollute an area must build a political "praying" place for them to invade this last Buddhist country. Already the Muslim population has grown up to 2 million starting from couple of thousand in a matter of decades and number of mosques have risen to stunning 36000+. Country's Major tourist attractions like Yala National Park has been destroyed unlawfully to make room for the growing barbaric Islamic tribe. Number of Mosques is already way above the number of Buddhist worship places the entire country has for 70% of Sinhala Buddhist population.

The latest happened on June 15th of 2014 where Muslims attacked innocent ven. Monk heading to a sermon near his temple at Aluthgama, The never ending attacks by Muslims on Buddhists caused major unrest among even the most compassionate people known to world. Any tourists who visited Sri Lanka knows correctly the degree of hospitality Sinhala Buddhists have for them. They could never feel a trace of that in Muslim majority area they ever passed. It is the same even in Sri Lanka. The ven Monks did their best to educated and calm down Sinhala Buddhist people despite the attack on them by tribal Islamic population. The peaceful rally the Sinhalese had to show their displeasure had been brutally attacked by mob organized inside Islamic Mosque in Aluthgama. This lead to situation where Buddha statutes were destroyed by cruel Muslims, collecting and using large number of petrol bombs, trying to attack peace keeping officials. Burning business places of their own to show wrong picture to world and ignite the racist flames among Muslims. They even went as far as killing their own people to blame Buddhists. Lunatic Muslim mob injured non -Muslim women & children and burnt down businesses and homes of unarmed non-Muslim civilians in Aluthgama, Dharga town and Beruwela, which are less than 100kms from the capital Colombo. There is destruction of life and property on daily basis but the government is not doing anything to apprehend the Jihadist culprits. Only the victimized Buddhists are arrested and their cries/damages are all prohibited in national media.


Sri Lanka a small island with a majority 70% Buddhist also has a minority of Christians, Hindus and Muslims. Sri Lanka has just come out of a 30 year humanitarian war fought alone by Sinhala people against ruthless Tamil Tiger terrorist who strangled innocent Tamils until their death. Muslims did not contribute even by a word to the humanitarian war to save Tamils from ruthless Tigers. They simply enjoyed the show acting the role of a fool who smuggled fuel and various goods to Tiger terrorists to earn big money. Even with those support, Tigers decided to slaughter 100+ praying Muslims in Kanthakkudi mosque. Even afterwards Muslims were supporting Tigers in all the fake peace pacts ever to come, seeking their pound of flesh in disturbed environment. Agenda was clear only later, Muslims whole heartedly loved Tiger terrorists for killing Sinhala Buddhists in humanitarian war. Without anybody knowing they hate Sinhala Buddhists so badly in Sri Lanka which they believe Allah made for Muslims.

Members and Ex members of Parliament

Even the USA and India clearly warned Sri Lanka about Islamic terrorist groups operating in hiding in Sri Lanka. Dirty Muslim brotherhood motivates SL Muslims to consider the international Islamic terrorism as their guiding stars and tend to extend all the support they can to well known terrorists around the world. Even 9/11 attacker is invited to deliver Islamic lectures in Sri Lankan Mosques. There is a very high potential that those international Islamic criminals may use Sri Lanka as a safe house to plot their next attack on the civilization you belong to.

The Executive president in Sri Lanka has the power to stop all this with a simple stroke of pen, but it is not done. We ask Why not?


Please join hands with us to eradicate Islam from Sri Lanka and show your displeasure to it's ever dirty Agenda. May you be a Buddhists, any non-Muslim even a Muslim, If you have logical mind, we are sure you can smell the danger brutal Islam has in store for you and your future generations. Signing this petition is the best that you can do to go against it.