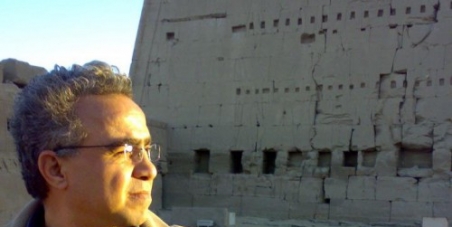 The President of the Arab Republic of Egypt and his Prime Misnister: End of legal proceedings against Karam Saber, the right to art creation.

By continuing you agree to receive Avaaz emails. Our Privacy Policy will protect your data and explains how it can be used. You can unsubscribe at any time. If you are under 13 years of age in the USA or under 16 in the rest of the world, please get consent from a parent or guardian before proceeding.
This petition has been created by karam S. and may not represent the views of the Avaaz community.
x

Sign this petition
karam S.
started this petition to
The President of the Arab Republic of Egypt and his Prime Misnister

Karam Saber is a human rights defender and an Egyptian writer. He was sentenced to 5 years in prison for "contempt of religion" following the publication of his book "Where is God?". We demand that legal proceedings against him end immediately and a legislative reform in accordance with the new constitution of January 2014 that provide that "No freedom restricting sanction may be inflicted for crimes committed because of the publicity of artistic, literary or intellectual product". .

THE HISTORY IN DETAIL

The lawyer, Karam Saber, dedicate its life to the defense of human rights and to writing. On one hand, since 1998, he manages the Land Center for Human Rights (http://www.lchr-eg.org/) in Cairo (Egypt) where he fights, in particular, for economical ans social rights for the peasants and the fishermen. On the other hand, he is a prolific writer that already wrote and published 25 novel or collection of short stories. Until now he never had to worry about his artistic activities.

In 2010, he wanted peasants' voices to be heard and wrote a book entitled "Where is God?" It's a collection of eleven short stories depicting the grief, sorrow, happiness and joys of farmers and their relation to their Creator. Telling the life and environment of those marginalized ones requires the use of a simple language; that very language of their daily lives.

Shortly after his book was published, Karam received a phone-call from Beba (a town in the governorate of Beni Suif which is about 150km south from Cairo). He believed this phone-call was from a spontaneous admirer of the collection. Then he learned that, in 2011, one of his fellow citizens filed an accusation to the Beni Soueif prosecutor against him, accusing him of making use of religion in order to propagate extreme ideas and also of contempt against one religion... He believed that the complaint is dismissed.

On may 7th, 2013 Karam was convicted in absentia by Beba Misdemeanour Court. Karam was not even aware of an ongoing investigation. He found himself sentenced to five years in prison and a 1,000 pounds fine. The judge thus applies the maximum penalty provided by Article 98 of the Criminal Code which provides that "Confinement for a period of not less than six months and not exceeding five years, or a fine of not less than 500 pounds and not exceeding 1,000 pounds shall be the penalty inflicted on whoever makes use of religion in propagating, either by words, in writing or in any other means, extreme ideas for the purpose of inciting strife, ridiculing or insulting a heavenly religion, or a sect following it, or damaging national unity or social peace".

In violation of many judicial procedures, the judgment is solely based on the accusation of Karam's fellow citizen of Beni Soueif, a police informant that testified that the story collection contained attacks against God himself but the investigation report clearly showed that was an analphabet, some prosecution witnesses that we know nothing about and, icing on the cake, a phone recording of the conversation that Karam had with the so-called admirer. Recording that was made without a prior legal authorization, be it for the recording procedure itself or for its conservation.

The trap would have been perfect if the police succeeded to to arrest him at his workplace. This attempt was a serious breach to his right. Egyptian laws give 8 days following the in absentia decision to ask for a retrial; this demand has furthermore a suspensive effect. Hopefully, Karam and his lawyers were able to introduce this demand.

So after a very long trial hat lasted almost a year and that was made of more than ten hearing that Karam couldn't attend because he was afraid of being once more exposed to a risk of arbitrary detention; after Al Azhar Islamic Research Complex (which is a Muslim religious reference according to the Constitution), the Institute for Islamic Fatwa of the Ministry of Justice and the Orthodox Coptic Church testifies that the book does contempt religion, the same Court confirmed the 5 years sentence on March 11th, 2014. Thus, to the arbitrary power of the state we have now to add theocratic power of the religious institutions who have little to do with assessing literary work but yet erect themselves in absolute master of what "Literature" means.

Karam and his lawyers have of course lodge an appeal. On June 5th, 2014, the Misdemeanour Court of Appeal of Beba has confirmed the first decision and thus the fact that Karam is guilty of "defamation of religion" in his book “Where is God ?” But Once again, the Court decided in absentia. A retrial, whose date of hearing is not yet known, will then happen. Meanwhile, Karam remains free but the risk exists that authorities doesn't respect his freedom.

In parallel with this misdemeanor proceedings, Karam's lawyers presented a request to the authorities and to the Cairo administrative Court asking them to acknowledge that article 98 of the criminal Code, on which is based the Karam's judgment, was null and void as the articles 67 and 71 of the country's new constitution which entered into force in January 2014 provide that "No freedom restricting sanction may be inflicted for crimes committed because of the publicity of artistic, literary or intellectual product". Thus, the condemnation of Karam is struck as unconstitutional.

Beyond the legal issues raised by this case. It mainly raises substantive issues of a moral and political kind. First of them, we should ask ourselves if a revolution happened in Egypt or not. Karam Saber's case started under Mubarak's government, was then heard during Morsy's and now the case is about to be definitely judged under al-Sissi's. Why such a continuity ? Why the new constitution, that protects more the liberties, is not applied to Karam ? Can't the Egyptian people benefit from the few gains he obtained thanks to his courageous social movement that he made - still make - and that was very costly in terms of martyrs ?

In this case, isn't al-Azhar's position in contradiction to its own “Al Azhar's oulemas document on fundamental liberties” that emphasizes every person's right to choose their beliefs and opinions and to express them ?

What kind of logic would ever allow a Court to judge fictitious characters for certain words and phrases, which in their very literal meaning could be rejected by both the Church and Al Azhar's Islamic Research Complex?

Is it possible in the 21st century to put people's imagination to trial? The characters being judged exist only on paper. They are fiction. The author's own vision is not to be considered that of his characters. It is not possible to judge authors based on the deeds or crimes committed in a fictitious literary work. An author while works as an artist and thus differentiates himself from his own characters, which should seem obvious with a basic knowledge of literary critique and artistic rules?

And how could Egypt Courts consider such a case admissible in the first place? All such convictions which make use of religion as a mere instrument be sufficient for the moral killing of all opponents in their own social environment by pretending that they commit blasphemy? (According to the EIPR's report entitled "the siege of thought" presented in the 11th of September 2013 Dalynews Egypt edition, have been identified since the fall of Mubarak 63 cases charged of "contempt of religion" under the Article 98, which represents a net increase. The report also notes that 100%. cases considered outside Cairo were sentenced)

These questions fortunately didn't go unheeded and Karam Saber has already received a lot of support. First of them is the Supreme Council for Literature of the Ministry of Culture that produced a positive report of Karam's book. This report shows how the book puts emphasis on the value of work and does not express contempt for religion whatsoever. According to the report, the book aims at reaffirming the value of work and rejecting injustice, calling for religion to promote peace.

The Court decision had a serious impact on public opinion, hence the support initiative by 46 organizations (the list is available on Allafrica website) and personalities, among which the "Egyptian Creativity Front", the Egypt Bar Association, the Journalists Union, the Union of Writers as well as critiques and writers lead by Dr Gaber Asfour (former Minister of Culture), Dr Salah Fadl (Member of the Academy of Arabic language, he is considered the greatest literary critic Egyptian) , and renowned writers such as Ibrahim Abdel Magid (award-winning Egyptian writer like the prestigious Naguib Mahfouz medal) , Bahaa Taher (Egyptian Arabic writer awarded the prize for fiction) , Youssef al Qaid (Egyptian journalist and writer author of more than thirty works), Salwa Bakr (novelist and literary critic whose Union writer named one of his novels one of the best 100 Arabic novels and in 1993 awarded the literary prize of Deutch Welle).

In adition to them, we have to mention political parties, trade unions of workers and farmers with whom Saber has been working for years in the context of the organization he manages.

To conclude, we hope that the authorities will hear the former Minister of Culture, Dr Gaber Asfour who twice wrote in Al Ahram Newspaper:

Stop the masquerade, and put an end to this situation before revolutionary Egypt becomes the laughing stock of the civilized world

The first signatories of the statement

32 . Yusuf Qaeed - Chairman of the story of the Supreme Council for Culture