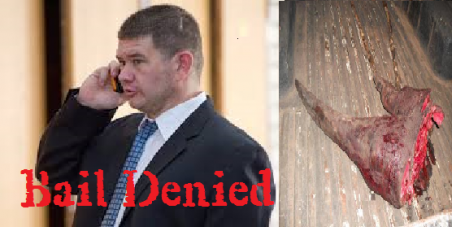 The Presiding Magistrate, Hatfield Magistrates Court, Pretoria, is respectfully requested to deny bail to Hugo Ras and his 9 co-accused who have been charged with no less than 318 charges regarding their involvement in Rhino poaching related crimes.

The names of the accused are as follows:

The group is alleged to have contributed to the brutal slaughter and mutilation of 24 rhinos in state and privately owned game reserves, resulting in 48 horns poached. Only two of the 24 rhinos that had been attacked, survived, but they were dehorned after they had been darted. Twenty two of the rhinos were darted with the veterinary drug M99, the other two were shot. An additional 36 horns were either stolen or obtained through other illegal means.
The killings took place between 2008 and 2012, during which period the syndicate illegally obtained 84 rhino horns and killed 22 rhinos valued at nearly R22 million.

Accused No.1, Mr Hugo Ras, is the head of this syndicate and is a repeat offender with another court case still being heard in the Pretoria North High Court. In South Africa we have had many accused of this ilk who have been released on bail, pending their trial only to find that they continue their poaching business without hindrance, as in the case of Hugo Ras who was in possession of 5 crates of M99, in 2012 and is currently facing charges contravening the Medicines and Related Substances Control Act.

These accused all have the means and ability to flee the country and as such we implore the court to deny them bail pending their trial
The 10 accused have been charged with multiple offences including several rhino poaching-related charges such as theft, fraud, malicious injury to property, attempting to defeat the ends of justice, racketeering, money laundering, intimidation, illegal possession of firearms and ammunition.

In terms of Section 60 of the Criminal Procedures Act the state is required to consider the following with regard to granting bail:

1. Whether or not there is a likelihood that the accused, if released, would endanger the safety of the public or an individual, or would commit a Schedule 1 offence,[71] the court takes the following into account:

2. Whether the nature or circumstances of the offence are likely to induce a sense of shock or outrage in the community in which it was committed;

4. Whether there is the likelihood that the accused will attempt to influence or intimidate witnesses, or conceal or destroy evidence

5. Whether the likelihood that the accused will attempt to evade trial if released

It is the undersigned petitioner’s belief that any one or more of the above are likely to exist should the accused be released on bail and respectfully request the above Honourable Court to deny bail accordingly.