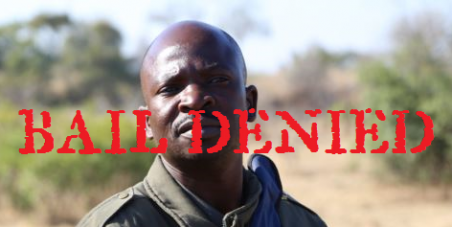 Two of these accused, Mr Lawrence Baloyi and Mr Andre Mabanda are tasked with protecting our wildlife and are employed by SANParks as a Section Ranger and Trails Ranger respectively. These men have abused their positions to torture and kill rhinos for their own greed. It is our contention that people that abuse their positions to serve and protect should in fact get harsher sentences than regular poachers and should definitely not get given bail.

Both Mr’s Lawrence Baloyi and Andre Mabanda have been suspected in the past of involvement in other rhino poaching incidents in the Kruger National Park, our flagship park. One of the poachers Johan Silinda who had ties with Mabanda and who was often seen in the company of Mabanda has since been shot and killed in the Kruger National Park whilst poaching. We need to send out a strong message to all employees in our National Parks that this will not be tolerated and people found to be involved in these crimes will not be given any leniency or bail.


In terms of Section 60 of the Criminal Procedures Act the state is required to consider the following with regard to granting bail:

1. Whether or not there is a likelihood that the accused, if released, would endanger the safety of the public or an individual, or would commit a Schedule 1 offence,[71] the court takes the following into account:

2. The nature or circumstances of the offence are likely to induce a sense of shock or outrage in the community in which it was committed;

4. Whether there is the likelihood that the accused will attempt to influence or intimidate witnesses, or conceal or destroy evidence

5. Whether the likelihood that the accused will attempt to evade trial if released

It is the undersigned petitioner’s belief that any one or more of the above are likely to exist should the accused be released on bail and respectfully request the Honourable Court to deny bail accordingly.