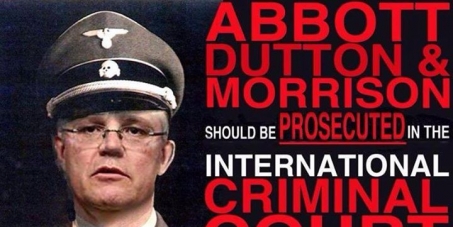 By continuing you agree to receive Avaaz emails. Our Privacy Policy will protect your data and explains how it can be used. You can unsubscribe at any time. If you are under 13 years of age in the USA or under 16 in the rest of the world, please get consent from a parent or guardian before proceeding.
This petition has been created by Hettie L. and may not represent the views of the Avaaz community.
x

Sign this petition
Hettie L.
started this petition to
The Prosecutor, International Criminal Court
Australia is one of the wealthiest countries in the world, and used to have a proud record of welcoming refugees.
In 1992, policy changed, and mandatory detention was introduced. Not for a few weeks, for health and identity checks, but for indefinite periods, while refugee status was determined, a process for which no body saw any urgency.

Asylum seekers, including children, were incarcerated for 3 or more years, in detention centres built in the harshest possible, remote desert sites. Access to legal advice was severely restricted, and journalists were heavily discouraged from reporting on conditions in the camps.

That was bad enough, but in 2001, with an election looming and government popularity way down, the cynical prime minister of the day seized on the episode of a boatload of asylum seekers who had suffered engine failure, and been picked up by the Norwegian vessel Tampa. Pandering to the worst xenophobia of a group of voters who believed that refugees were taking their jobs, he drummed up panic about hordes of "illegals" swarming into the country. He lied to the electorate, claiming that parents had thrown their children into the sea to force other ships to rescue them, and won the election.

Then began the era of Off Shore Processing. First on Christmas Island, then Nauru, and now on Manus Island, part of Papua New Guinea.
The detention centres are rudimentary - Manus is mostly tents. On Nauru, there are 4 toilets for 400 people, and they are situated 400 metres from the tents.

The regime, administered by for profit companies including Transfield, G4A, and Serco, is draconian, and getting steadily worse. Water is scarce. In a place where the recommended daily intake of drinking water is 5 litres, the inmates might get 1 litre. Women are denied access to sanitary supplies and water to wash. They are afraid to walk to the ablution blocks after dark, but the toilets probably don't work anyway.

Hunger strikes and self harm are common. Suicides are not infrequent. People sew their lips together. Children are sexually assulted and beaten. Men are handcuffed and beaten for crying for freedom. Many are sent back to their country of origin even when there is strong evidence that their lives are in danger.

Now the Government has declared that anyone arriving in Australia by boat, without a visa, will NEVER be allowed to settle here. It has plans to send some people to Cambodia, wants Papua New Guinea to take some.

These are Crimes against Humanity, against the UN conventions on Refugees, against torture and arbitrary detention, and the rights of the child.

Unlike most cases that the International Criminal Court addresses, these events are not all in the past. They are ongoing.

If the ICC has no way of issuing an injunction, demanding the immediate cessation of this cruel practice, will it please, expedite its investigation of the evidence being presented to it by Australian Independent Member of Parliament, Andrew Wilkie, and Human Rights Lawyer, Greg Barnes.


The Australian Human Rights Commissioner conducted an investigation into children in the detention centres, which was tabled in parliament just before 7.00 pm on Friday, February 11, 2015 , after having been in government hands since November 2014. By that time, the government also had the Moss report, which corroborated many of Professor Triggs' findings.

As if he had never seen the Triggs report before, and as if he did not know that the Moss report supported Triggs' findings,the Prime Minister flew into a rage, and, in a televised session of Parliament, attacked not only the report, but the president of the Commission, in a display reminiscent of the worst such displays in 3rd world assemblies.

Those two reports would make an excellent place to start,
but there is also the UN Committee against Torture etc report of November 14, 2014.
Please, Mr Prosecutor, declare this policy to be a Crime against Humanity, and require the Government Immediately to bring the detainees to Australia, provide them with much needed medical and psychiatric care, process their claims for refugee status swiftly, and release them into the community with the right to work, and full access to all social services.

They have fled regimes such as the Taliban, they have come from Iran, Iraq, Sri Lanka, Burma... And Australia locks them up for daring to seek the protection to which they are entitled.

The policy is a great shame to Australia. We are better than this.

Today: Hettie L. is counting on you