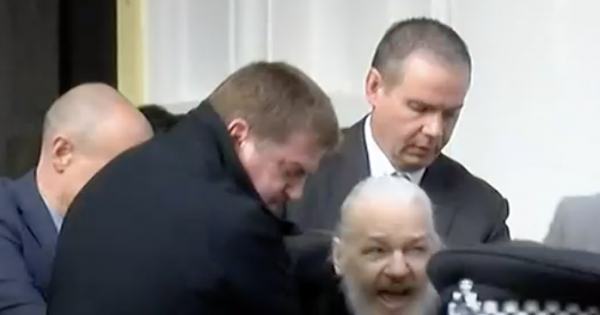 By continuing you agree to receive Avaaz emails. Our Privacy Policy will protect your data and explains how it can be used. You can unsubscribe at any time. If you are under 13 years of age in the USA or under 16 in the rest of the world, please get consent from a parent or guardian before proceeding.
This petition has been created by Chris L. and may not represent the views of the Avaaz community.
x

Sign this petition
Chris L.
started this petition to
The Queen of England and the UK Parliament
Julian Assange is an Australian Journalist now locked up in HMP Belmarsh in London without charge - held "on remand" while awaiting extradition to the US for the act of reporting on US War-crimes. He is held in conditions which are killing him.

I care deeply about this case because journalists and publishers should not be held in solitary confinement, and tortured to death for publishing information that the people have a right to know.

If your immediate reaction to hearing Assange’s name is “he deserves it, because he’s a smelly troublesome rapist who should die”, you need to know that your reaction is a natural consequence of a coordinated smear campaign perpetrated against Mr. Assange for the last 10 years.  As Nils Melzer, the UN Special Rapporteur on Torture has written: “I had been subconsciously poisoned by the relentless smear campaign, which had been disseminated over the years. … once I looked into the facts of this case, what I found filled me with repulsion and disbelief.”

Mr. Assange is being held in conditions far worse than that of murderers and rapists. He is held in solitary confinement, which is viewed as torture. He has been prevented from contacting his lawyers to prepare his defence and is blocked from receiving documents that he can use in preparing his own defence against the extradition.

Judges at various hearings Mr. Assange has attended over the past few months have universally treated him with contempt.  They refuse to allow any hearing of evidence concerning whether or not extradition is even allowed for Mr. Assange’s situation under UK law.

Judges overseeing the case are also making decisions about court venues that prevent public scrutiny of the proceedings, effectively turning this process into a secret trial.

In every aspect of Mr. Assange’s case we can see that all semblance of due process has disappeared. He is being persecuted in plain sight.

Mr. Assange’s health is rapidly deteriorating from the treatment he is receiving. At a recent court hearing he was unable to remember his own name or birthday, and could not express himself saying, in tears, "I can't think properly".

The UN Special Rapporteur on Torture, Nils Melzer, supported by medical opinion from Doctors experienced in torture who also visited Mr. Assange in Belmarsh, has stated that Mr. Assange shows all the signs of psychological torture. This week he restated that position, further warning that Julian Assange’s health is now deteriorating very rapidly, and he could very well die in custody.

The terrible situation currently being faced by Mr. Assange is a travesty, which is due to a cynical and obscene twisting of all the values that are held dear in liberal democracies around the world.

If Julian Assange dies in Belmarsh prison, or if he is extradited to the US to face charges of “espionage” and 175 years in prison simply for doing journalism, this will kill free speech and freedom of the press around the world. And, we will lose a great man who has already suffered so very much for his “crime” of letting us all know about the crimes our governments have been committing in our names with our money.

The incarceration of Julian Assange must end now.

Time is of the essence. The UK Parliament must quickly debate the situation of Julian Assange, and reach the only supportable decision – NO EXTRADITION, and free Julian Assange immediately.

The Queen of England also needs to step in at this crucial moment. Failure to do so will leave a black mark on the land of habeas corpus for generations to come.

Today: Chris L. is counting on you