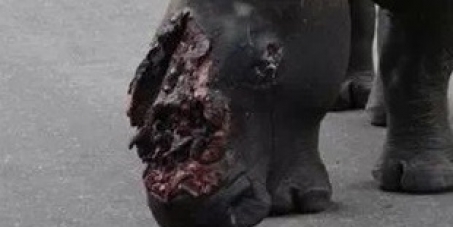 By continuing you agree to receive Avaaz emails. Our Privacy Policy will protect your data and explains how it can be used. You can unsubscribe at any time. If you are under 13 years of age in the USA or under 16 in the rest of the world, please get consent from a parent or guardian before proceeding.
This petition has been created by Louis V. and may not represent the views of the Avaaz community.
x

This is the front of a Rhino's face, after her horn had been callously removed!!!! No Anesthetics..... Rhinos are fast becoming extinct due to this savagery, fueled by the Chinese and to which many governments are turning a blind eye.

We propose that funds be availed by the Governments to:

1. Clear a corridor of 50 Meters along the entire inside perimeter of the parks of ALL vegetation. This corridor can then be illuminated, patrolled and thus controlled to keep insurgents out. In transfrontier areas, such a corrridor should be established along the actual borders.

2. Avail sufficient numbers of troops to their respective National parks to effectively control and patrol these corridors, thus protecting the animals and eradicating and exterminating the vermin who are the perpetrators.

Today: Louis V. is counting on you